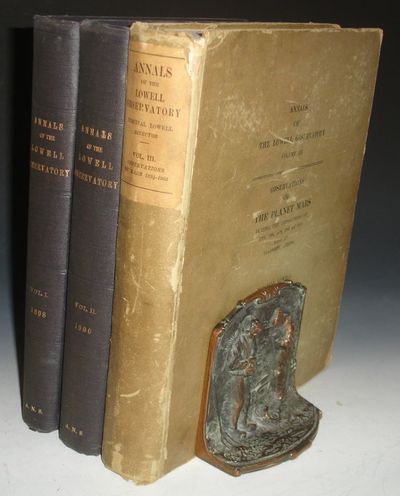 by Lowell, Percival
Boston/Cambridge; 1898, 1900 and 1905: Houghton, Mifflin and Co. And the University Press. First Editions. Quarto. Quarto. Volume I: 391pp. frontispiece, Illustrated in color and in black & white, some folding plates. Observations of the planet mars during the opposition of 1894-5 made at Flagstaff, AZ. Volume II: frontispiece, 523pp., illustrated. Observations of the planet Jupiter and its satellites 1894 and 1895; Observations of Mars 1896 and 1897 made at Flagstaff, AZ and Tacubaya, Mexico. Bound in original pale green printed wraps. Volume III: frontispiece. 293pp., 60pp. supplement. Observations of the planet Mars during the oppositions of 1894, 1896, 1898, 1901, and 1903 made at Flagstaff, AZ. 293pp., 60pp. supplement. Illustrated throughout with black and white plates. An ex-library set with their label and stamp. Volumes one and two bound in full blue cloth, spine lettering gilt, volume three bound in original paper covered boards lettered in black, some chipping to spine ends and corners. Bound in original pale green printed paper covered boards, paper spine label printed in black. A very good set of this important and scarce work. (Inventory #: 021521)
$1,175.00 add to cart or Buy Direct from
ALCUIN BOOKS, ABAA
Share this item

np/nd (ca.1930) : Privately Printed
(click for more details about Confession of an Ex-Bellman)

What's the Matter with Ireland

New York; (1920) : Devin-Adair
(click for more details about What's the Matter with Ireland)
View all from this seller>