Important Collection of Robert K. Merton Books and Offprints SIGNED AND INSCRIBED to a Colleague and Friend 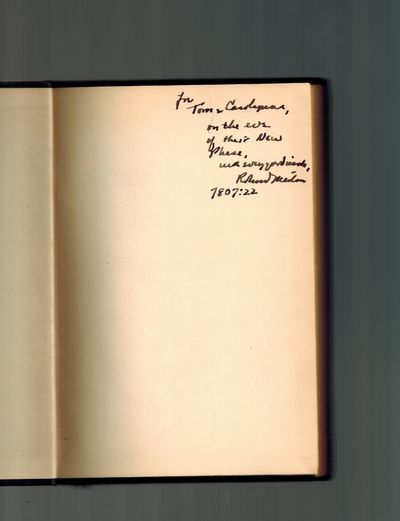 by Robert K. Merton ( 1910-2003 )
1946-1998: Various Publishers An important collection of 14 separately titled items, 7 books and 7 offprints, spanning the years 1946-1998, all SIGNED AND INSCRIBED by Robert K. Merton (RKM) to his former student, friend, colleague and noted sociologist Thomas Gieryn. Robert K. Merton is considered to be a founding father of modern sociology and the founder of the sociology of science. In 1994 he became the first sociologist awarded the National Medal of Science. His contributions to the field include such ideas as focus groups, role models, self-fulfilling and self-defeating prophecy, reference groups, and unintended consequences. He was himself a role model, inspirational teacher,mentor and friend to a whole generation of sociologists, as evidenced by these 14 inscriptions. Thomas Gieryn, Rudy Professor of Sociology Emeritus at Indiana University, studied under RKM at Columbia University. He is known for his concept of "boundary work" which has been cited more than 6300 times since its 1983 introduction in the American Sociological Review (IU Dept. of Sociology). The 7 books, either solely authored or edited with others by RKM, are "Mass Persuasion: The Social Psychology of a War Bond Drive" (Harper & Bros., NY. 1946, later ptg.), "Varieties of Political Expression in Sociology" (U. of Chicago, 1972, essay by RKM), "Scienza, Tecnologia E Societa Nell' Inghilterra Del XVII Secolo" ( Franco Angeli Editore, Milano, 1975 ), "Contemporary Sociological Problems 4th Edition" (HBJ, NY, 1976), "The Socilogy of Science in Europe" ( S.I.U. Press, Carbondale, IL 1977), "Toward a Metric of Science: The Advent of Social Indicators" (John Wiley & Sons, NY, 1978), and "Qualitative and Quantitative Social Research; Papers in Honor of Paul Lazarsfeld" ( The Free Press, NY, 1979). Offprints are : Societe Francaise de Sociologie Bulletin ( 1976, III, No.6), "Alvin Gouldner, Genesis & Growth of a Friendship" (Columbia U., 1982), "The Uses of Institutionalized Altruism" (Prog. of Gen. & Cont. Education in Humanities, 1975), "Misunderstanding the Merton Thesis; A Boundary Dispute between History & Sociology" by Gary A. Abraham (ISIS, 1983, No.74), "Puritanism and the Rise of Modern Science; The Merton Thesis" edited by I. Bernard Cohen, afterword by RKM (Rutgers U. Press, 1990), "De-Gendering 'Man of Science': The Genesis and Epicene Character of the Word Scientist" (Rowman & Littlefield, 1997), and "Paul Lazarsfeld 1901-1976" ( Edition L'Harmattan, Paris 1998). All books and offprints are Very Good Plus to Fine. (Please email for detailed list of items, conditions, inscriptions, and scans.) A remarkable and important archive, given that SIGNED AND INSCRIBED works by Merton are quite uncommon, and that taken as a whole they reveal so much of the man as mentor, friend, and scholar. . SIGNED AND INSCRIBED BY AUTHOR. First Edition. Near Fine/Near Fine. Association Copy. (Inventory #: 006799)
$4,000.00 add to cart Available from
Dale Steffey Books
Share this item
Dale Steffey Books
Offered by

Report on the Exploration of the Yellowstone River

Washington, D.C. : Government Printing Office , 1868
(click for more details about Report on the Exploration of the Yellowstone River)

New York : Harper & Brother Publishers , 1866
(click for more details about (Lincoln) A Child's History of the United States. In Three Volumes (Vol. III. Part second. History of the Great Rebellion.))
View all from this seller>