Letter in Support of Paul Jones 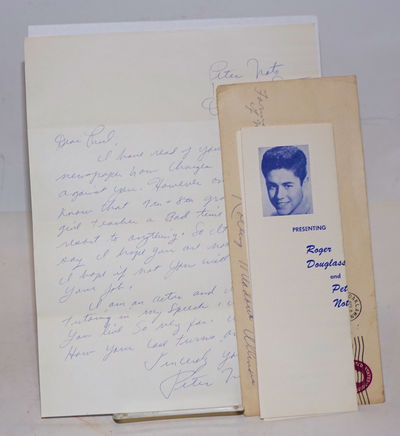 by Mariah, Paul aka Paul Jones
Oaklawn, IL, 1961. Single sheet handwritten letter, one-side only, folded twice to fit inside standard envelope hand-addressed to Paul Jones c/o Speech and Drama Dept. Jonas E. Salk Elementary School, Rolling Meadows, Illinoi, Forward if necessary, light wear and yellowing to envelope, canceled stamp dated April 8 1961 Oaklawn. Also included a folded 4p. program featuring the letter-writer Peter Noto with photos of the Chicago actor. Paul Mariah was the pseudonym of Paul Jones who taught at Jonas Salk in the 1960s. According to the letter in support of him from an actor seeking voice tutoring Jones was at the time accused of some impropriety with 7th or 8th grade students. From Mariah's collection. (Inventory #: 226375)
$75.00 add to cart or Buy Direct from Bolerium Books
Share this item