Palimpsest: A History of the Written Word. 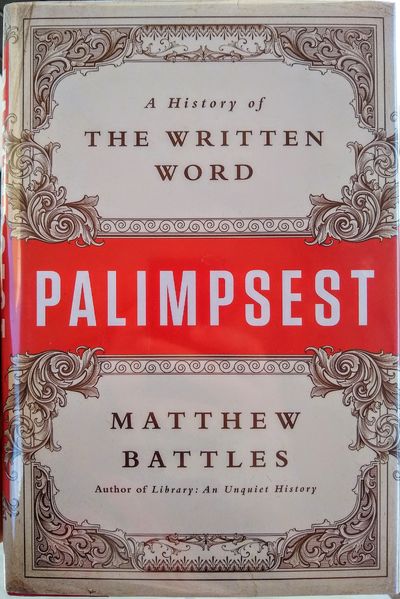 by BATTLES, Matthew.
New York:: W. W. Norton, 2015., 2015. 8vo. [x], 262 pp. Figs., index. Quarter red gilt-stamped boards over beige gilt-stamped boards, dust jacket. Very good. ISBN: 9780393058857 "A profound, eloquent meditation on the history of writing, from Mesopotamia to multimedia. / Why does writing exist? What does it mean to those who write? Born from the interplay of natural and cultural history, the seemingly magical act of writing has continually expanded our consciousness. Portrayed in mythology as either a gift from heroes or a curse from the gods, it has been used as both an instrument of power and a channel of the divine; a means of social bonding and of individual self-definition. Now, as the revolution once wrought by the printed word gives way to the digital age, many fear that the art of writing, and the nuanced thinking nurtured by writing, are under threat. But writing itself, despite striving for permanence, is always in the midst of growth and transfiguration. / Celebrating the impulse to record, invent, and make one's mark, Matthew Battles reenchants the written word for all those susceptible to the power and beauty of writing in all of its forms." – Publisher. Reviews: "[Extraordinary] depth. . . fantastic photographs. . . a marvel of readability." — W. Ralph Eubanks, Wall Street Journal; "[A] sweeping, lively, in-depth study. . .Scholars will find this book invaluable, as will any designer looking. . . to adapt Classical traditions." — Michael Washburn, Boston Globe; "[Exhilarating]. . . . Battles is a gifted stylist, and his history of writing is both a paean to the powers of language and an extended demonstration of his own prowess. Nearly every page features an example of beautiful writing about writing." — Nick Romeo, Christian Science Monitor. (Inventory #: GG01664)
$8.00 add to cart Available from
Jeff Weber Rare Books
Share this item