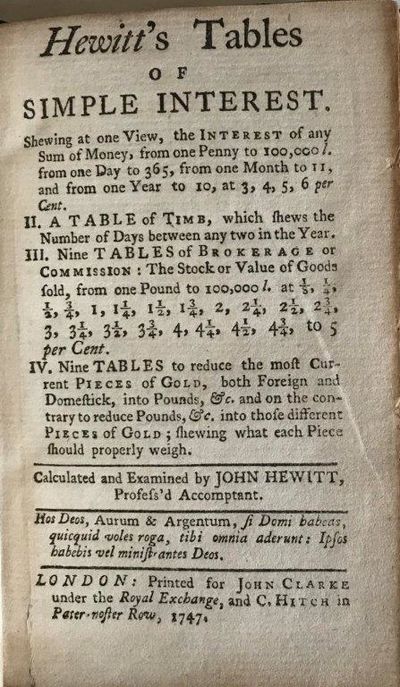 by HEWITT, John [fl.1738-1760].
London:: Printed for John Clarke and C. Hitch, 1747., 1747. 12mo. [10], [i-v], vi-cxxix, [i] pp. Second leaf is signed A3, A[7] recto blank. Modern full speckled-calf, elaborate gilt-stamped compartments, raised bands, black leather spine label. Ownership signature of John Coryton. Lovely copy. RARE. Complete title: Hewitt's Tables of Simple Interest. Shewing at one View, the Interest of any Sum of Money, from one Penny to 100,000 l., from one Day to 365, from one Month to 11, and from one Year to 10, at 3, 4, 5, 6 per Cent. II. A Table of Time, which shews the Number of Days between any two in a Year. III. Nine Tables of Brokerage or Commission: The Stock or Value of Goods sold, from one Pound to 100,000. Nine Tables to reduce the most Current Pieces of Gold, both Foreign and Domestick, into Pounds, &c. and on the contrary to reduce Pounds, &c. into those different Pieces of Gold; shewing what each Piece should properly weigh.

The first edition was issued in 1736. This is the second edition. A Dublin printing followed in 1773. Provenance: John Coryton is likely son to Peter Goodall, who took the Coryton name after his marriage to the niece of the fourth and final Baronet, with whose death in 1739 the baronetcy became extinct (UK National Archives). LOCATIONS: William Andrews Clark Memorial Library (UCLA); The British Library, St. Pancras; National Library of Scotland. National Archives. "Coryton of Pentillie, Pellaton." [available on-line]. English Short Title Catalog N002433. (Inventory #: GG01725)
$750.00 add to cart Available from
Jeff Weber Rare Books
Share this item

Surgical Anesthesia, Addresses and other papers.

by ZEEHANDELAAR, Is, JBZ., Arts.