The Voyage of the Jeannette; The Ship and Ice Journals 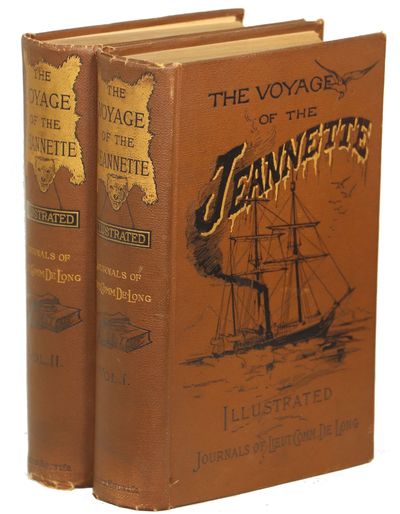 by De Long, George W.
Boston: Houghton, Mifflin and Company, 1883. First edition. Hardcover. Near Fine. 2 vol. Large 8vo. [3], iv--xii, 440, [4]; [3], iv-x, [1], 442-911, [3] pp. Bound in brown cloth with gilt lettering and decorations on the spine and black lettering and decorations on the front board. "Jeannette" is outlined in gilt with gilt decorations meant to simulate icicles. On each volume's rear board the decorations and the lettering are done in blind. Illustrated by a frontispiece in each volume, maps, and many illustrations on wood engraving and stone. Includes a fold-out map in the text of volume one, a map in the rear pocket of volume one, and a fold out map in volume two. Edited by his wife Emma De Long. De Long was a Lieutenant-Commander in the U.S.Navy and commander of the Polar Expedition of 1879-1881. The journals narrate the expedition made under the authority of the U.S. Navy and financed by J.G. Bennett. The Jeannette left from San Francisco on July 8, 1879 and stopped at numerous places in the Bering Sea. The ship went adrift in the ice near Herald Island, November 1879. After drifting at sea for nineteen months, the ship was crushed and sunk northeast of the New Siberian Islands. Thirty-three men left the ship and twenty-five of these men reached the Lena delta where De Long and eleven other men died. Arctic Bibliography 3839. The journal details the ice, the animal life, the drift in the Siberian arctic seas, the health of the crew, auroras and storms, several islands, and the Lena Delta. An exceptional set with beautiful vignettes of images from the expedition, including several miniature illustrations of the animals encountered along the way. A Near Fine set with two ownership stamps in each volume and a few hints of wear to the extremities. (Inventory #: 00007555)
$800.00 add to cart or Buy Direct from
Evening Star Books
Share this item