Warrant for a lot along Casey's Creek in Christian County, Kentucky. Partially printed document, accomplished in manuscript and signed. 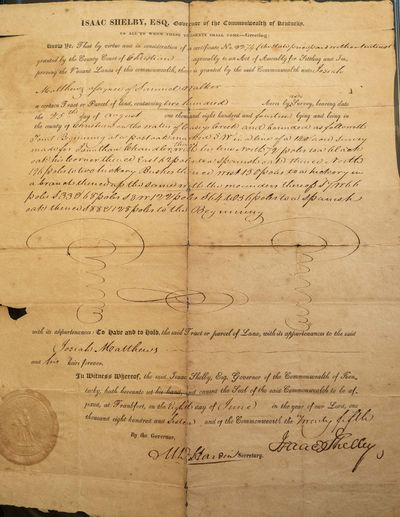 by Shelby, Isaac, Governor of the Commonwealth of Kentucky .
Frankfort, Kentucky: 8 June , 1816. 1 leaf, 327 x 400 mm. Seal of the Land Office of Kentucky. Lot warranted to Josiah Matthews, described in manuscript with paraphs. Signed by the governor and by M.L. Hardin, secretary. Partially divided along horizontal fold; chip on left edge; toned.

The survey refers to acreage bound by "a post," "a black oak," "a Spanish oak," "two hickory bushes," and the creek. The lot is near modern Little River, in Christian County, in the Southwestern part of the state. Isaac Shelby was Kentucky's founding governor, inaugurated the same day that the Commonwealth joined the United States. His term ended in 1796, but with the outbreak of the War of 1812 Shelby was brought out of retirement to serve a second term. By all accounts he was a brilliant governor. (Inventory #: 5960)
$250.00 add to cart Available from
Rare Book Studio
Share this item
Rodger Friedman Rare Book Studio
Offered by

Bulletin of the Atomic Scientists. Volumes 3-5

The Theory of Spectra and Atomic Constitution Three essays

Cambridge : Cambridge University Press , 1922
(click for more details about The Theory of Spectra and Atomic Constitution Three essays)
View all from this seller>