Brotherhood of the new life; letter from Thomas Lake Harris with passing reference to recent criticisms 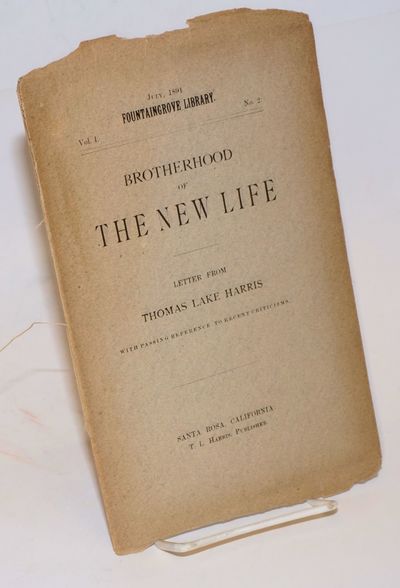 by Harris, Thomas Lake
Santa Rosa, California: T.L. Harris Publishers, 1891. Pamphlet. 15, [iii]p., untrimed wraps heavily chipped and partly detached, binding thread broken, a paragraph-long declaration of intent is laid in, good condition. Fountaingrove library, vol. 1, no. 2. This work offers Harris' defense against critics of his communal organization. In it appears, among other themes, Harris' explanation of his earlier wooing of the wealthy Laurence Oliphant and his mother, into the community as a purgative for Laurence's formerly tawdry existence as an English clergyman. Although the Oliphant's later withdrew from the Brotherhood in 1881, Oliphant himself continued to believe in Harris' psychic powers. (Inventory #: 226194)
$40.00 add to cart or Buy Direct from Bolerium Books
Share this item