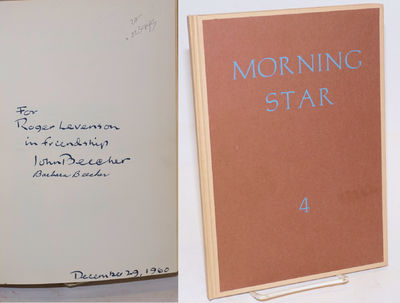 by Beecher, John, ed
Scottsdale, AZ: [John & Barbara Beecher], 1959. Hardcover. [22p.], original cloth binding with a paper cover pasted on as issued, limited to 500 copies, fine condition, inscribed by the Beechers and signed in full "For Roger Levenson in friendship, John Beecher, Barbara Beecher, December 29, 1960." Woodcuts by Barbara Beecher, handset & printed by John and Barbara Beecher. Poems by Henry Birnbaum, William Newberry, John R. Reed, Olga Cabral, Jerry M. Wheeler, Jack Anderson, Mo Tien Têng, Charles Shaw, John Beecher & Peter Jones. John Beecher, born in New York City, grew up in Birmingham, Alabama and worked at the open hearth furnaces in Birmingham's steel mills. This experience contributed to the working class imagery and related radicalism that informed all of his poetry. Beecher, after World War II, took a teaching position at San Francisco State University, in 1950 he was fired from it for refusing to sign a loyalty oath. In 1977 the California legislature reinstated his position at the University. Levenson was founder of the Tamalpais Press and an instructor at UC Berkeley. (Inventory #: 225945)
$25.00 add to cart or Buy Direct from Bolerium Books
Share this item