Hearn and His Biographers, the Record of a Literary Controversy; Together with a Group of Letters from Lafcadio Hearn to Joseph Tunison Now First Published 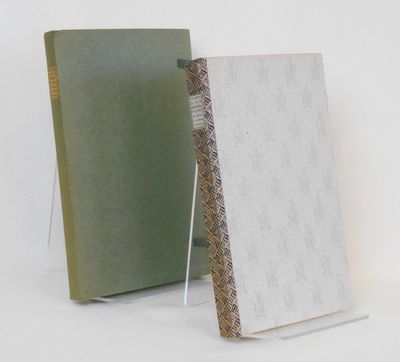 by Hearn, Lafcadio; Lewis, Oscar
San Francisco: Printed by the Grabhorn Press for The Westgate Press, 1930. Limited First Edition. Hardcover. Near fine. One of 350 copies, octavo size, [122] pp. An early Grabhorn Press publication, in wonderful condition with most signatures unopened; with initials designed by Valenti Angelo. Publised by The Westgate Press, one of the private enterprises launched by the Grabhorn Press. It was established in 1929 by San Francisco historian Oscar Lewis and Robert Grabhorn with the intention of publishing limited, signed editions by popular contemporary authors. It was successful for three years, until it had to be closed due the strain of the economic depression, and its inability to come to an acceptable business arrangement with Edwin Grabhorn.

Published here for the first time, this edition focuses primarily on the letters exchanged between Lafcadio Hearn (1850-1904) and Joseph Tunison (1849-1916), and the literary controversy that occurred after Hearn's death. Patrick Lafcadio Hearn had in his family background blood both Greek and Arab, Irish and Gypsy. Born in Greece, raised in Ireland, at the age of 19 he emigrated to the United States spending time in Cincinnati and New Orleans, whence sprang the Creole Sketches. He eventually travelled for work (newspaper reporting) to the West Indies and thence to Japan, where he found his true home. He married into a Samurai family to Setsuko Koizumi and had four children, fully immersing himself into the Japanese culture. Largely unknown to westeners at the time, his writings on the customs, religions and literature of Japan were avidly read; although Hearn would come to condenm the Westernization of Japan, he accepted its inevitability, and attempted to describe the county even as it was changing.

From the library of noted San Francisco collector Morgan A. Gunst, with his attractive bookplate.

___CONDITION: A near fine copy, covers are clean except for faint age-toning to the top edges, corners are straight and unrubbed, the text block is tight and strong with solid hinges, most signatures remain unopened and therefore internally bright and complete, and entirely free of prior owner markings; the items that were tipped in have caused the boards to bow outwards slightly in the middle, overall a near fine copy. The case is very good overall; it fastened in the Japanese style with ribbon with and bone clasps, the clasps are missing and only remnants of the ribbons remain, the head of the backstrip has suffered a small bump, otherwise it is very clean and bright; even with the clasps missing, overall very good.

___POSTAGE: International customers, please note that additional postage may apply as the standard does not always cover costs; please contact us for details.

___Swan's Fine Books is pleased to be a member of the ABAA, ILAB and IOBA and we stand behind every book we sell. Please contact us with any questions you may have, we are here to help. (Inventory #: CNBR057)
$138.00 add to cart or Buy Direct from
Swan's Fine Books
Share this item

Seattle : Printed by Frank McCaffrey at his Dogwood Press , 1932
(click for more details about The Principles Underlying Typography)

London : The Hogarth Press , 1947
(click for more details about Mr. Norris Changes Trains)
View all from this seller>