The Original Program for House of Flowers 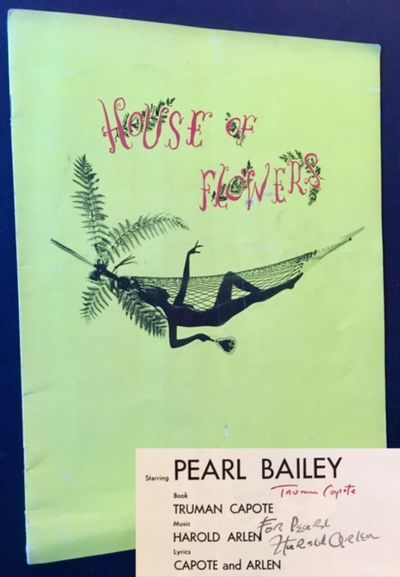 by Truman Capote (Book) and Harold Arlen (Music)
New York: Passantino, 1955. Original wraps. Near Fine. A wonderful piece of theatre history, the original 1955 program for Truman Capote's "House of Flowers". THIS COPY IS NOT ONLY SIGNED BY TRUMAN CAPOTE (on the title page, next to his printed name) BUT IS ALSO INSCRIBED BY HAROLD ARLEN, WHO WROTE THE MUSIC FOR THE PLAY, TO PEARL BAILEY, THE PLAY'S LEAD. This inscription appears next to Arlen's printed name on the title page as well. The program itself is clean and Near Fine in its stapled ye,low wrappers, with very faint creasing along the panels. Tall, thin quarto, crisp black-and-white photos thruout of the principals involved in the production and performance of the play. (Inventory #: 15414)
$2,500.00 add to cart or Buy Direct from Appledore Books
Share this item
Appledore Books
Offered by