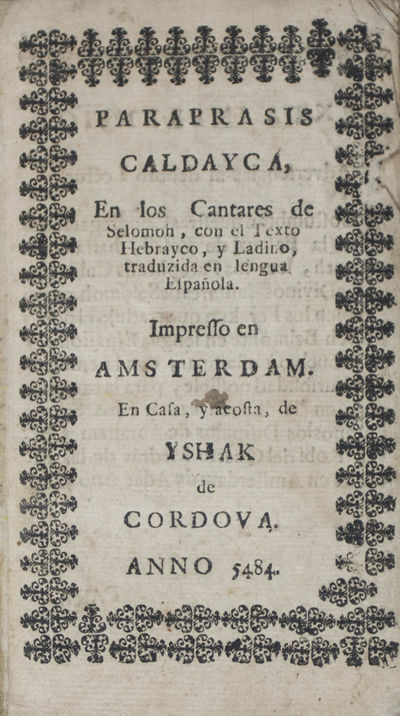 by Belmonte, Moses (translation by)
Amsterdam: Yshak de Cordova, 5484. Sixth printing. Hardcover. fair to g. 16mo. 3.5x6". 167pp. Original mottled blue paper-covered boards. The book is a complete Spanish-language translation of the biblical book Song of Songs (Song of Solomon), and Perkei Avot (Ethics of the Fathers), the famed collection Jewish ethical sayings taken from the Talmud. Both of these works feature Moses Belmonte's translations, which had been printed in Amsterdam since 1644. The translations are interlinear, with each passage printed in Hebrew followed by the Spanish, and in the case of Song of Songs the translation is followed by Spanish-language commentary. These works are related in their connection to the Jewish observance of Passover. Song of Songs is read on the Sabbath during Passover, and chapters from Perkei Avot are traditionally read one each week between Passover and Shavuot. Pages 1-91 contain Song of Songs and 92-167 contain the text of Perkei Avot. As stated in the preface, this is the "Sexta Imprension" (sixth printing) of the work, based on Belmonte's translation, and that it was printed for the congregation of Rabbi Abraham Chavez (Abraham de Chaves), in Amsterdam. Title page bordered with a decorative woodblock motif. Decorative head and endpeices at the beginning and end of sections. Text in Spanish, with passages in Hebrew and some Ladino. Binding with some rubbing and bumping to extremities. Spine partially torn and chipped. Interior front and back cover and endpapers with copies period notes and scribbling from previous owners in pencil and ink. Starting at the title page, p.24, 48, 56, 78, 120 and the interior back cover. Some light smudges, foxing and/or water staining throughout. Binding in fair, interior in good condition overall. Moses Belmonte (1619 - 1647, Amsterdam) was a poet and translator of Portuguese Jewish origin. Alternative titles: "Paraphrasis Caldayca, en los Cantares de Selomoh, con el Texto Hebrayco, y Ladino, traduzida en lengua Española" "Paraphrasis Caldaica, en los cantares de Selomoh: con el Texto Hebrayco y Ladino, traduzida en lengua Española" Refrences: KAYSERLING (1890), p. 31, 72 (under Bible and Misnajoth), PALAU (1923) under 26619, PEETERS (1933) 1093,1130 (1130: under Paraquim). (Inventory #: 44044)
$2,000.00 add to cart or Buy Direct from
Eric Chaim Kline Bookseller
Share this item