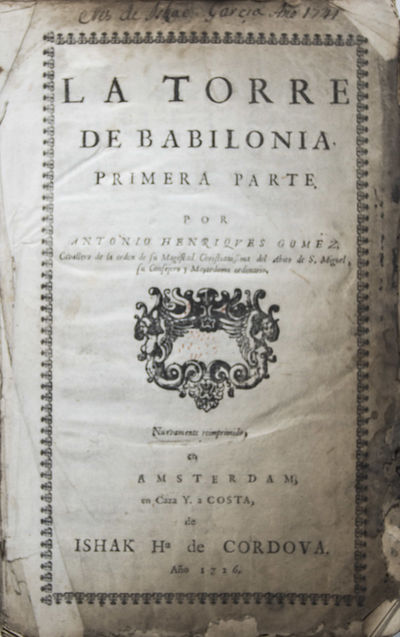 by Gomez, Antonio Henriques (Antonio Enriquez Gomez)
Amsterdam: Ishak de Cordova (Yshak de Cordova), 1726. Nuevamente Reimprimido" (Reprint). Hardcover. poor to fair. Folio. 13.5x8.5". 142pp. Original tan calf boards. Title page decorated and bordered with woodcut motifs. The work, original publisher in Rouen, France in 1649, and containing a mixture of prose and poetry, "La Torre de Babilonia" (the Tower of Babylon) is Gomez's re-interpreretation of the biblical story of the Tower of Babel, into the Spain of his own time. The book narrates the misfortunes of a man named Adam, also known as El Peregrino, in the midst of a perverted civilization (Babylon), here a metaphor for the urban society of Madrid. Above all, "La Torre de Babilonia" is a criticism of the greed, hypocrisy, pride, and ambition that the author believed were widespread in Spain. Decorative head and endpieces throughout, as well as large initials. This is the first part of the work. Text in Spanish. Binding loose with abrasions, bumping, rubbing and chipping to the covers and spine. Interior pages with soiling, water stains and creasing throughout. Some pages including the title page with chipping along the edges. pages 131-142 with chipping resulting in some loss of text. Interior back cover with the previous owner's notes in pencil and ink. The top of the title page with Title page with the name of the previous owner "Ishac Garcia" in ink. Binding in poor, interior in fair condition overall. Antonio Enriquez Gomez (c.1600 -1663) was a Spanish-Jewish dramatist and poet from a family of crypto-Jews (marranos). * A "tomo segundo" (second volume) of the work from 1670, is known to exist. (Inventory #: 44042)
$750.00 add to cart or Buy Direct from
Eric Chaim Kline Bookseller
Share this item