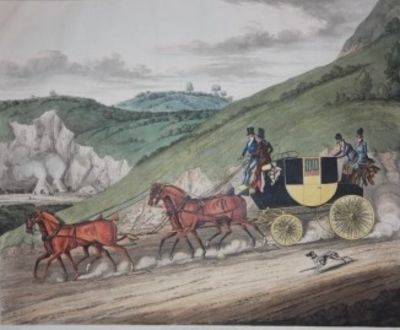 by Alken, Henry
London: S. & J. Fuller, February 1813. First edition. Half Morocco. Very Good. Scarce series of four Alken foxhunting plates. (No copies appearing on OCLC First Search.) One of Alken's earliest works, prior to any book published by him. Elephantine Oblong, 43 by 54 cm. The four hand-colored etchings are by Clark and Dubourg after Alken. The plates are entitled "Throwing Off", "Breaking Cover", "In Full Cry" and "The Death". The coloring is restrained, amounting more to dusky red and blue highlighting that doesn't overwhelm the strong sepia tint resulting from the stipple printed ground. With a modern binding of half brown morocco, gilt ruling and title on spine, and buckram cloth on boards. With slipcase of same cloth. Condition: small corner chip repaired on first plate. Light wear of other plates. With blank sheets and tissue guards dignifying the plates. (Inventory #: 006130)
$3,500.00 add to cart Available from
White Fox Rare Books & Antiques
Share this item
White Fox Rare Books and Antiques
Offered by