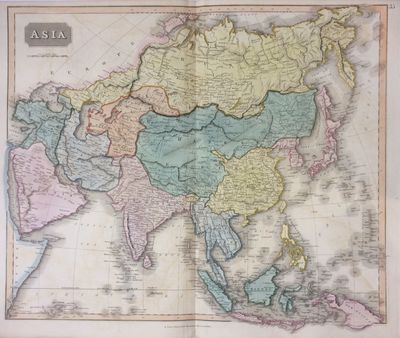 by THOMSON, John
Edinburgh: John Thomson. unbound. very good. Map. Engraving with original hand coloring. Image measures 19.5" x 23.75". Sheet measures 21" x 29". In good condition with minor wear along the original centerfold and minor foxing. Original plate mark is visible. This wonderful 1814 map by John Thomson covers Central Asia and extends from the Caspian Sea east to Japan and Kamchatka. Centered on Chinese Tartary, includes the regions of India, China, Tibet, Manchuria, Korea, (Gulf of Corea), Japan, Independent Tartary and Mongolia. The map notes important towns and cities, including the supposed location of Kara Koum, the capital of the Mongol Empire of Genghis Khan, in the Gobi Desert. A portion of the ancient silk route is also noted. The map appears in Thompson's circa 1816 edition of "New General Atlas". John Thomson (1777 - 1837) was a Scottish bookseller and publisher active in the early 19th century, who was one of the leaders in Europe who favored detailed and accurate mapping over the decorative and elaborate cartouches that appeared in earlier maps. His most important work was "Thomson's New General Atlas" and his "Atlas of Scotland". Although he went into bankruptcy twice during his career, his maps are today highly desirable for their scale and detail. This is beautiful example of his work. (Inventory #: 283420)
$475.00 add to cart or Buy Direct from
Argosy Book Store
Share this item

Coburg : Caspar Bertschen , 1615
(click for more details about Bits with open pear rolls)
View all from this seller>