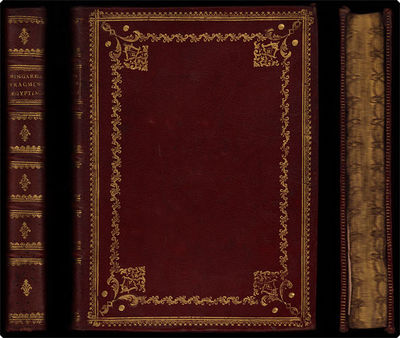 The Coptic language texts that are transcribed and edited here by G.L. Mingarelli (1722–93), a professor of Greek and Hebrew at the University of Bologna, were the property of Giacomo Nani (1728–97), a collector of Egyptian antiquities, and housed in the Bibliotheca Naniana in Venice.
Among the fragments of Coptic texts presented here, to mention just a few, are portions of the Bible, including parts of Jeremiah, and the Gospels of Matthew and John; homilies, the Apocryphal Acts of the Apostles, the life of St. Theodore, and the "Travels of John the son of Zebedee." It must be repeated that => all are fragments.
In this => sole edition, the Coptic texts are reproduced as best was typographically possible in the 1780s, with special fonts, in double-column format. The apparatus is in roman, Greek, and Coptic characters.
Binding: Contemporary Venetian red goat, boards nicely and somewhat richly tooled in gilt with rolls, fillets, and sizable corner devices, board edges with a simple gilt roll, and each spine compartment with a gilt center device and defined by gilt fillets and a gilt roll. Stone pattern–marbled endpapers. All edges gilt and gauffered.
Provenance: From the library of American collector Albert A. Howard, small booklabel ("AHA") at rear.

Brunet, I, 60. Binding as above; a dozen small pin-type wormholes in spine not extending into text, sides with small spots of discoloration. Lower board edges a little scuffed. Lacks the free endpapers. Foxing, sometimes heavy, in text; still, a desirable copy. (Inventory #: 38967)
$2,500.00 add to cart Available from
Philadelphia Rare Books & Mss.
Share this item

The beggar boy: Or, history and adventures of James Altamont, afterwards Earl Altamont.

London : Pr. by T. Malden for Ann Lemoine and J. Roe , [1805]
(click for more details about The beggar boy: Or, history and adventures of James Altamont, afterwards Earl Altamont.)
View all from this seller>