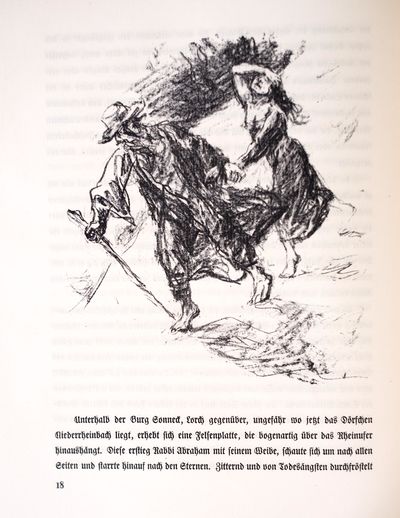 Folio. Publisher's half-morocco, with title in gold, with yellow board sides bearing a lithograph on the upper cover. Printed on laid paper. Original open slipcase, with paper label, joints split. 58p. Fine copy with a touch of wear to spine ends. The Rabbi of Bacharach, set in the middle ages, is Heine's unfinished novel that describes the ordeal of Rabbi Abraham and his wife in the small town of Bacharach, Germany .

Gentiles come to the Passover Seder in order to secretly plant a body of a Christian child. They will accuse the Rabbi of ritual murder. Then when he is taken away, they will rob his home. The rabbi and his "schönne" [beautiful] Sarah manage to leave their home during an interval in the seder and run to the river docks. They are then transported (for a fee) down the Mainz to Frankfurt where they enter into the Jewish quarter without incident. In that quarter, life is fully described with all its variety and color.

This unfinished story remains popular because it pictures life in the medieval Jewish community with detailed description of worship, customs, and pecking orders, as well as, dress, manners and a variety of activities within the Jewish quarter. Liebermann's realistic sketchbook style, depicts scenes with a charcoal drawing like simplicity. The stark flat depiction creates an atmosphere of dark foreboding.

The 19th century poet Emma Lazarus wrote a biographical sketch of Heine that includes commentary on The Rabbi of Bacharach: "During the period of his earnest labors for Judaism, [Heine] had buried himself with fervid zeal in the lore of his race, and had conceived the idea of a prose-legend, the Rabbi of Bacharach, illustrating the persecutions of his people during the middle ages. Heine, one of the most subjective of poets, treats this theme in a purely objective manner. He does not allow himself a word of comment, much less of condemnation concerning the outrages he depicts. He paints the scene as an artist, not as the passionate fellow-sufferer and avenger that he is. But what subtle eloquence lurks in that restrained cry of horror and indignation which never breaks forth, and yet which we feel through every line, gathering itself up like thunder on the horizon for a terrific outbreak at the end!"

Refer: Lazarus, Emma (1849-1887) From the Biographical Sketch of the life of Heinrich Heine reprinted in The Rabbi of Bacharach by Heinrich Heine. Mondial, 2008. (Inventory #: 1344)
$1,500.00 add to cart Available from Golden Legend
Share this item
Golden Legend, Inc.
Offered by