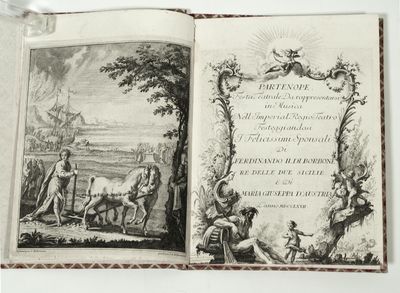 This drama was composed at the command of Empress Maria Theresa for the marriage of Ferdinand I (1751-1825), king of Two Siciles, to Archduchess Maria Josepha of Austria. The drama was at Vienna's Burgtheater on September 9, 1767. Mozart was in attendance. It had been presented at court the evening before.

This libretto has little to do with the traditional basis for the opera Partenope, originally written in 1699 by Silvio Stampiglia*. Instead, it was given over to singing and dancing to celebrate the happiness of the royal couple, with special Neapolitan equipment for the 2
stage setting (described in detail in the text). Also of importance is the role of the choir, which is presented here as a character in the action, not simply a passive voice. This production failed as drama since the plot had little to offer in the way of suspense as well as other qualities that are required for successful drama. Nevertheless, due to its flourishes and use of the spectacular, it was restaged in Livorno, Naples, Palermo, and Roma (Sartori 17845-50).

Partenope in this setting was also staged at the Regio Teatro del Nuovo San-Souci [Torino?], in 1775 (Berlin: Haude e Spener). Like the few other Ghelen publications of the decade devoted to festival performance, Partenope is an elegant production with its many fine engravings and ornaments suggestive of the characters at the beginning of each scene. Ghelen was the court printer for the Holy Roman Empire during this era. There are a total of eight engravings (two full-page) by J.C. von Reinsperger after J. Biderman.

*According to Greek legend, Parthenope was the daughter of the god Achelous and the Muse Terpsichore. She cast herself into the sea and drowned when her songs failed to entice Odysseus. Her body washed ashore at Naples, on the island of Megaride, where the Castel dell'Ovo is now located. When people from the city of Cumae settled there, they named their city Parthenope in her honor.