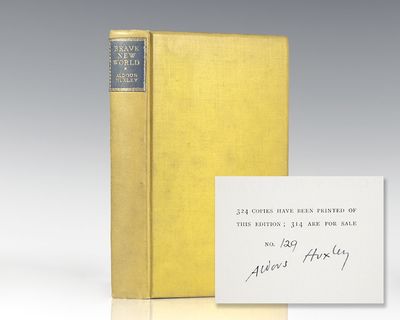 by Huxley, Aldous
London: Chatto & Windus, 1932. Signed limited first edition of Huxley's masterpiece. Octavo, original yellow cloth, gilt topstain as issued. One of a limited edition of 324 numbered copies signed by Aldous Huxley on the limitation page. In near fine condition with light toning. A nice example. Huxley wrote Brave New World in response to H.G. Wells' Utopian novels of the early 20th century. Set in London in the year 2540, the novel anticipated future developments in psychological manipulation and reproductive technology which created a profound shift in the character of society. "A nightmarish prognostication of a future in which humanity has been destroyed by science... easily Huxley's most popular (and many good judges continue to think his best) novel" (DNB). "After the success of his first three novels, Huxley abandoned the fictional milieu of literary London and directed his satire toward an imagined future. He admitted that the original idea of Brave New World was to challenge H.G. Wells' Utopian vision... The novel also marks Huxley's increasing disenchantment with the world, which was to result in his leaving England for California in 1937 in search of a more spiritual life. The book was immediately successful" (Parker & Kermode, 161-62). Named by Modern Library as one of the 100 Greatest Novels of the twentieth century. (Inventory #: 89752)
$6,200.00 add to cart or Buy Direct from
Raptis Rare Books
Share this item

The First Men in the Moon.

London : George Newnes, Limited , 1901
(click for more details about The First Men in the Moon.)

Memoirs of William Hazlitt. With Portions of His Correspondence.

London : Richard Bentley , 1867
(click for more details about Memoirs of William Hazlitt. With Portions of His Correspondence.)
View all from this seller>