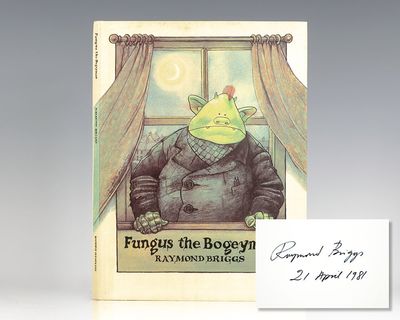 by Briggs, Raymond
London: Hamish Hamilton, 1977. First edition of illustrator Raymond Briggs' classic work. Quarto, original pictorial boards, pictorial endpapers. Signed and dated by the author on the verso of the front free endpaper, "Raymond Briggs 21 April 1981." In near fine condition. English illustrator and children's book author Raymond Briggs is best known in Britain for his 'books without words' told entirely though full color illustrations. Initially published in 1977, Fungus the Bogeyman follows one day in the life of the title character, a working class Bogeyman with the mundane job of scaring human beings. (Inventory #: 89018)
$750.00 add to cart or Buy Direct from
Raptis Rare Books
Share this item