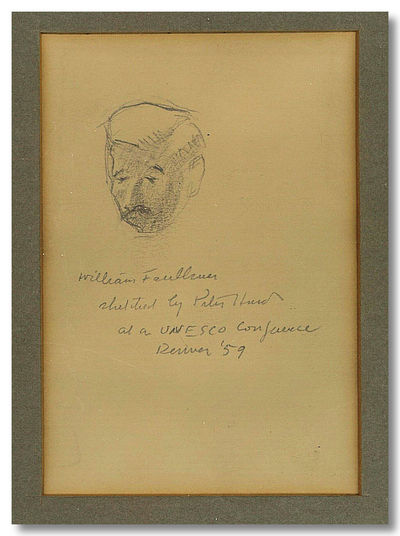 by [Faulkner, William]: Hurd, Peter
Denver, 1959. Original pencil portrait, (measured to mat edges) 5.5 x 3.75" (14 x 9.5 cm). Matted and framed under glass. Not examined out of frame, faint tanning to paper, but very good. A quarter profile sketch of Faulkner's head, captioned in the artist's hand: "William Faulkner sketched by Peter Hurd at a UNESCO Conference Denver '59." One of the subjects of the 1959 Denver National Conference on UNESCO was "The cultures of the Americas: achievements in education, science, and the arts," and Faulkner addressed the closing Plenary Session on 2 October 1959 (see Petersen D46a). On the paper sealing the verso of the frame Hurd's friend and collaborator, historian and novelist Paul Horgan, has inscribed in ink: "Portrait Sketch of William Faulkner by Peter Hurd / Collection of Paul Horgan." (Inventory #: WRCLIT80436)
$850.00 add to cart or Buy Direct from
William Reese Co. - Literature
Share this item