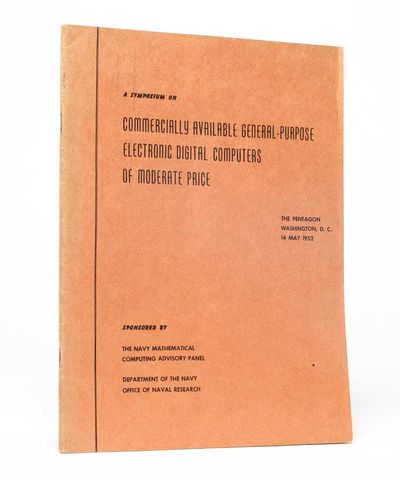 by [Rees, Mina] The Navy Mathematical Computing Advisory Panel
Washington DC: [U.S. Department of Commerce, Office of Technical Services], 1952. First Edition. Near Fine. Near Fine copy in original orange paper wraps, with spine lighly sunned. Internally about Fine. Quarto measuring 7.75 x 10 inches and collating [2], 41 pages: complete. Rare surviving copy of the first survey of electronic digital computers in the U.S., organized by pioneering mathematician Mina Rees. The only first edition on the market, this is a title that has never before sold at auction and is listed by OCLC at only 10 institutions.

In her introduction to the survey, Rees notes that "Until recently, all commercially available general-purpose digital computers were large and cost many hundreds of thousands of dollars. Within the past year, however, a number of manufacturers have smaller, more compact (usually slower) automatic computers for sale at less than one hundred thousand dollars." Because this change opened the door to a wider variety of businesses and firms accessing computers, Rees points to the symposium as being timely and necessary. In this space and this historic moment, scientists, mathematicians, manufacturers, and government agencies could consider how to continue improving and reducing cost on the machines; and they could consider their wide applicability across fields. Rees, herself a luminary who became the first woman president of the American Association for the Advancement of Science, is featured in this survey among other notables including Albert Auerbach and Richard E Sprague. The papers include work the MINIAC, the Elecom, and the Circle Computer. These were the first of their kind, as was the symposium itself. Complete with over 20 black and white photos, charts, and diagrams, it is an important and rare piece documenting computers' shift into the necessary and ubiquitous technology they are today.