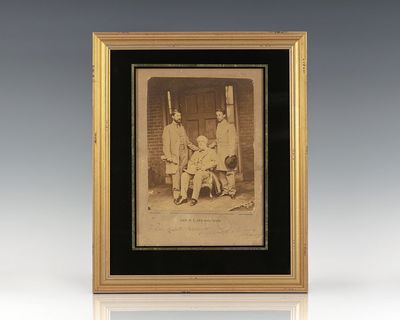 by Brady, Mathew. (Robert E. Lee)
1865. Photographic portrait of General Robert E. Lee flanked by his son, General George Washington Custis Lee, on his right and Colonel Walter Taylor on his left. Inscribed by one of the earliest photographers in American history, Mathew Brady, on a mount, "To Col. Robert Alexander Compliments of his friend, M.B. Brady." The photograph was taken at Lee's estate in Richmond, Virginia in April of 1865, only days after his surrender to Ulysses S. Grant at Appomattox. This is one in a series taken by Brady in the basement below the back porch of the estate and from the original wet plates in the Brady-Handy collection. "This photograph is one of the most celebrated images produced by Brady, who established his reputation in the 1850s as the preeminent portraitist in New York and Washington, D.C. In the aftermath of the Civil War, Brady sought out General Robert E. Lee, who had returned to the Confederate capital at Richmond, Virginia, after his surrender to General Ulysses S. Grant at Appomattox Court House on April 9, 1865. At the photographer's request General Lee reluctantly put on his uniform and posed at the back of his residence with his son, General George Washington Custis Lee (left), and his chief of staff, Colonel Walter H. Taylor (right). The image conveys the pathos of defeat for the Confederacy and for Lee personally. For Brady, who had been present at the first battle of the Civil War at Bull Run, this portrait completed his photographic coverage of the conflict" (WAM). Matted and framed. The entire piece measures 17 inches by 14 inches. An exceptional piece of Americana. One of the earliest photographers in American history, Mathew B. Brady brought home the reality of the Civil War to the American public with his innovative use of a mobile studio and darkroom to capture thousands of war scenes throughout the Civil War. Brady was also recognized as one of the premier photographic portraitists of the 19th century, taking photographs of numerous celebrities including Andrew Jackson, John Quincy Adams, Abraham Lincoln, and Robert E. Lee among others. (Inventory #: 89011)
$15,000.00 add to cart or Buy Direct from
Raptis Rare Books
Share this item