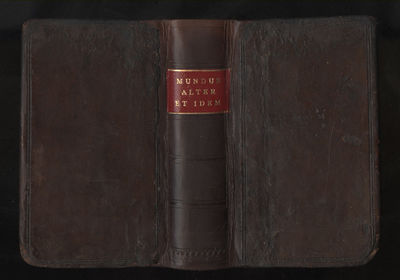 Joseph Hall's dystopian satire was written around 1605 and not intended for publication - it was first published anonymously in 1607, this is the second edition. Campanella Utopian La città del Sole was written in Italian around 1602 and first published in 1623 in Latin. Bacon's unfinished Utopian novel Nova Atlantis was first published in 1627. Hall's work is said to have inspired Gulliver's Travels and Bacon's and the Royal Society that it helped inspire are mocked by Swift in the same. First collected edition. Size: duodecimo (12mo). Quantity Available: 1. Shipped Weight: Under 1 kilo. Category: Literature & Literary; Science Fiction & Fantasy. Inventory No: 046710. (Inventory #: 046710)
$3,100.00 add to cart or Buy Direct from Pazzo Books
Share this item