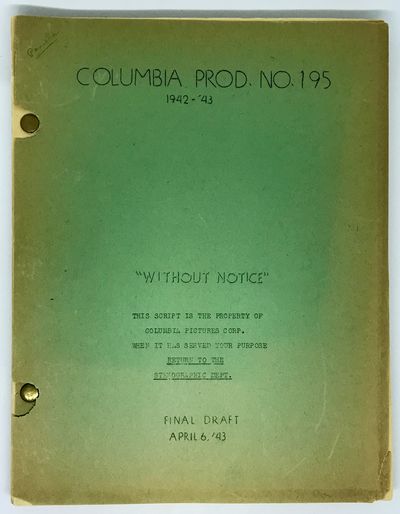 by Wallace, Richard (director); Harold Goldman, Lily Hatvany, Jack Henley, Joseph Hoffman, Andrew Solt (screenwriters); Charles Coburn, Marguerite Chapman, Bill Carter, Isobel Elsom (starring)
Culver City, CA: Columbia Pictures, 1943. Wraps. [title], [1] -117 pages. Copy belonging to Marguerite Chapman, who played Pamela, with her character's name on the front wrapper in holograph pencil. One of a number of comedies made during World War II that built around the "servant shortage" in the US during wartime, this one with a bit of "The man Who Came to Dinner" mixed in. An English author visits a small town in New England and inflames the local population by trying to take away a noted chef, who serves a Daughter of the American Revolution, and in turn rekindles hostilities in British-American relations. Set in New England. Green titled wrappers, noted as Final Draft on the front wrapper, rubber-stamped and production No. 195, dated April 6, 1943. Title pate present, dated April 6, 1943, noted as Final Script. 118 leaves, with last leaf of text numbered 117. Mimeograph. Pages Very Good plus, wrapper Very Good bound with two gold brads. Lacking rear wrapper. (Inventory #: 1417)
$375.00 add to cart Available from
lizzyoung bookseller
Share this item

Napa Wine With notes and Introduction by Brian McGinty