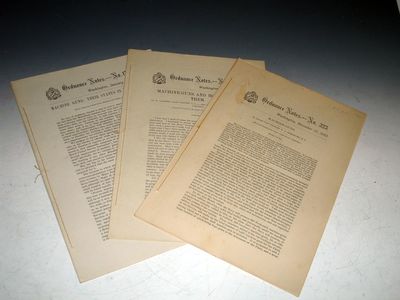 Washington, D.C.1882 and 1883: Ordance Office, War Department. Quarto. Together three items. No. 173- 22pp.; No. 198- 11(1)pp. and No. 323-23pp. and 3 folding plates at rear. The invention of the machine gun clearly would be a weapon that could revolutionize warfare. These issues are drawn from the Army's examination of the various weapons for use in the Indian wars. Initially, they were dismissed since the Indians did not fight from fixed positions. Here they are in order of issue: No. 173, Machine guns: Their status in warfare. They begin with information from Gatlin, Col. H. Fletcher of the Scots Guards; and others As well as their relation to Nordenfeldts, or those of Hotchkiss. On p. 11, R.J. Gatling defends his guns as superior in speed and accuracy, offering a prize to those who use Gardners or any other. Much of what was being debated was answered a little more than a generation later as World War I began. No. 198 Machine-guns and how to use them (June, 1882). This article was written by W. Gardner and includes one plate. Again the theory was problematic as debated by leading generals. The last (no. 323) is the most important and is written by Captain Lord Charles W.D. Beresford and simply entitled: Machine Guns. A chart shows how the Gatling, Gardiner, Nordenfelt compare with others, Three nice folding charts show how the Nordenfelt was used by the Navy, along with images of the Hotchkiss and the Gatling. Each string bound. (Inventory #: 025640)
$175.00 add to cart or Buy Direct from
ALCUIN BOOKS, ABAA
Share this item

New York : Doubleday , 1977
(click for more details about The Shining)

Milan; (2008) : 5 Continents
(click for more details about Buccellati: Timeless Art)
View all from this seller>