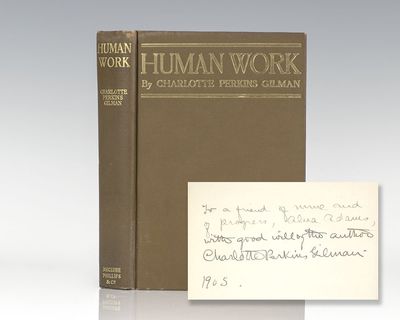 by Gilman, Charlotte Perkins
New York: McClure, Phillips & Co, 1904. First edition of Charlotte Perkins Gilman's ground breaking work and what she considered "her greatest work" (New York Times). Octavo, original cloth. Association copy, inscribed by the author on the front free endpaper, "To a friend of mine and of progress, Alva Adams, with good will of the author, Charlotte Perkins Gilman, 1905." The recipient Alva Adams served three terms as Governor of Colorado where he made significant progress for the labor movement and human rights by establishing the Bureau of Labor Statistics which forbade child labor, and passing a bill that ended public executions in Colorado. In very good condition. An exceptional association copy. Human Work represents the first ground breaking analysis on the equal importance of work in the lives of men and women. Noted feminist Charlotte Perkins Gilman maintains the notion that it was "sexuo-economic oppression of women" and not women's biology that kept women from achieving in all areas of work. Accusing men of appropriating certain work as "men's work" and masking the process as a biological locus rather than an exercise in power relations, Gilman asserts that men created an economic dependence that has prevented women from success in the workplace. (Inventory #: 89123)
$4,000.00 add to cart or Buy Direct from
Raptis Rare Books
Share this item