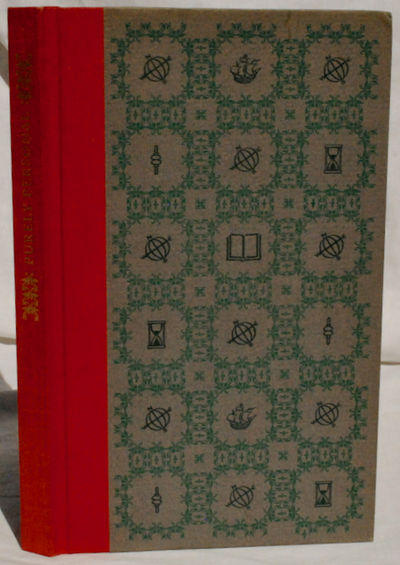 by Ruth Hoffman and Richard J. Hoffman (1912-1989)
Van Nuys, CA: Richard J. Hoffman, 1972. First Edition. Hardcover. Very Good. LIMITED EDITION of 50 copies, printed by Richard J. Hoffman. 8vo. 9 1/2 x 5 7/8 inches. (144) pp. Title-page printed in 3 colors, headpiece in 2 colors, printer's device on colophon; text clean, unmarked. Quarter red cloth, spine titled in gilt, patterned paper over boards; binding square and tight, gentle bumps to upper corners, else Fine. Subtitle: "The record of a sabbatical year, 1966-67 made up of notes written by Ruth Hoffman with asides [in brackets] added by Richard Hoffman who first set the type in 1967; the project was resurrected & completed in the Fall of 1972." Records a sabbatical year in Europe, but the project was interrupted by the throat cancer that debilitated Richard Hoffman. Rounce & Coffin Club Western Books Award, 1973. REFERENCE: Petko: A Tribute to the Life and Work of Richard John Hoffman, No. 212. (Inventory #: BO618-004)
$50.00 add to cart Available from
John Howell for Books
Share this item

Books Will Speak Plain: A Handbook for Identifying and Describing Historical Bindings

Ann Arbor, MI : The Legacy Press , 2014
(click for more details about Books Will Speak Plain: A Handbook for Identifying and Describing Historical Bindings)

European Hand Papermaking: Traditions, Tools, and Techniques. With an Appendix on Mould Making by Timothy Moore

Ann Arbor, MI : The Legacy Press , 2019
(click for more details about European Hand Papermaking: Traditions, Tools, and Techniques. With an Appendix on Mould Making by Timothy Moore)
View all from this seller>