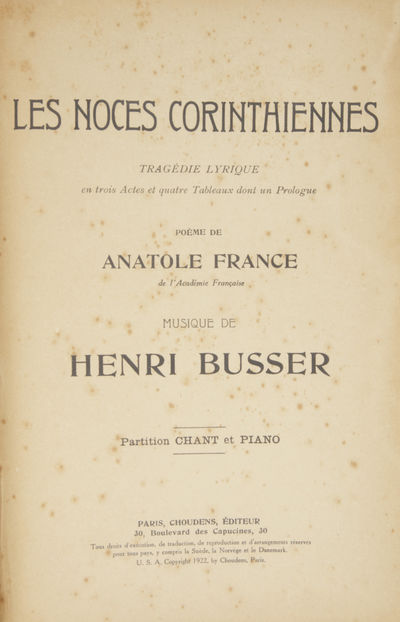 Les Noces Corinthiennes was first performed at the Opéra-Comique on May 10, 1922 to a libretto by Anatole France after J.W. von Goethe.

While Büsser composed a wide range of compositions, his most important works were for the stage. His operas include Daphnis et Chloé, Colomba and Les noces corinthiennes. Several stage works demonstrate his comic wit, especially Le carosse du Saint Sacrement and Roxelane as well as the farce Diaforus 60, an update of Molière's Le malade imaginaire. He composed in a sophisticated compositional style with finely crafted orchestration, but remained faithful to 19th-century French tradition." Wikipedia. (Inventory #: 28410)
$94.00 add to cart or Buy Direct from
J. & J. Lubrano Music Antiquarians
Share this item