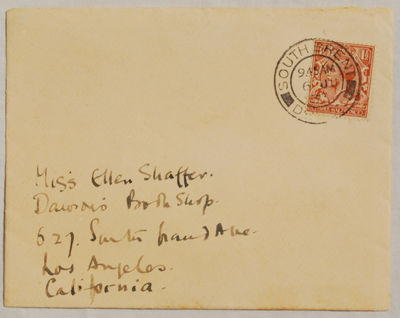 by Sister Mary Dominic, aka Helen M. D. Redpath
Marley, South Brent, Devon, UK: Syon Abbey, 1933. Paperback. Very Good. Signed by Author. Autograph Letter, signed, thanking Ellen Shaffer for sending a book and some Nuremberg Chronicle leaves. Single sheet. 9 x 7 inches. Handwritten on 1 side, folded twice for mailing; text clean, unmarked. Inserted in a mailing envelope, stamped and postmarked South Brent, Devon and addressed to Miss Ellen Shaffer, Dawson's Book Shop, 627 South Grand Ave., Los Angeles, California. Fine. The letter begins, "Dear Miss Shaffer, We think it so very good of you to have sent us the most interesting leaves for the Nuremberg Chronicle, & Lady Abbess sends her most sincere thanks for so kind a thought." Helen M. D. Redpath professed to the Birgittine Order in 1924 as Sister Mary Dominic. Redpath was the author of a biography of Birgitta, God's Ambassadress (1947). Sister Mary Dominic corresponds with Ellen Shaffer (1904-1993), cataloger at Dawson's Book Shop, where she became an expert in rare books, and in particular the Nuremberg Chronicle. In 1950, Shaffer published The Nuremberg Chronicle: A Monograph, one of her most widely read publications. Her papers are now held at the Bancroft Library at the University of California, Berkeley. Later, Shaffer had a distinguished career in librarianship. (Inventory #: OG1114-089)
$50.00 add to cart Available from
John Howell for Books
Share this item