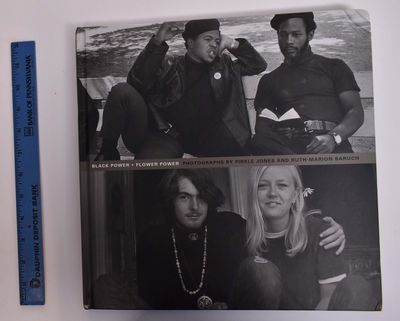 by Baruch, Ruth-Marion, Paul Liberatore and Jeff Gunderson
Novato, California: The Pirkle Jones Foundation, 2012. Hardcover. VG- corner bumping to top front of cover and pages.. BW-photographic boards with black and white lettering. 144 pp. BW illustrations. "Black Power * Flower Power" documents two of the most fascinating stories of 20th century America's cultural history-the growth of the Black Liberation Movement embodied by the Black Panthers and the 1967 blossoming of hippie "flower power" in San Francisco's Haight Ashbury district. Photographers Pirkle Jones and Ruth-Marion Baruch masterfully documented the early days of the Black Panther Party in the San Francisco bay area. This significant movement changed the fabric of the United States. Their photographs profoundly chronicle the influence on American social, political and cultural life and suggest the universal theme of family, commitment, and hope for the future. Ruth-Marion Baruch's photographs of San Francisco's Haight-Ashbury during the Summer of Love in 1967 depicts a Mecca transformed by the psychedelic music, fashion, and anti-war sentiment of the counterculture movement. -Amazon. (Inventory #: 166505)
$30.00 add to cart or Buy Direct from Mullen Books
Share this item