SIGNED BROCHURE: BEALE STREET DEVELOPMENTS. A GUIDE TO WHAT'S UP DOWN ON BEALE. Volume 1, Number 1 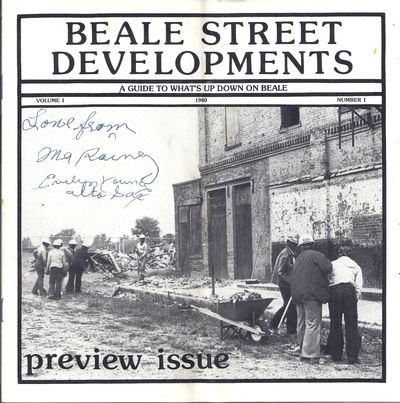 by [GLOVER, Lillie Mae (Ma RAINEY II) and YOUNG, Evelyn "The Whip"]
[Memphis, TN]: [Beale Street Development Corporation], 1980. First Edition. Softcover. Vertical crease down the center. Very Good. Illustrated brochure (8-1/4" x 8-1/2") with a pictorial cover. SIGNED on the front cover by Lillie Mae Glover as Ma Rainey and by Evelyn "The Whip" Young who adds "alto Sax." Glover, who ran away from home at 13 to sing in a traveling medicine show, performed as Ma Rainey II since 1939, after the legendary blues singer who died that year and whom she emulated. She died in 1985. Young, who became a professional musician at the age of 14, was known as "The Whip" because she played the saxophone with such vigor. She played tenor sax and arranged harmony on B. B. King's first major hit, "Three O'Clock in the Morning," and also performed with Little Richard, Memphis Slim, and others. She died in 1990. (Inventory #: 018762)
$75.00 add to cart or Buy Direct from Charles Agvent
Share this item