IN GREECE: JOURNEYS BY MOUNTAIN AND VALLEY.; With a preface by Théophile Homolle; translated from the French by Charles Frederic Hardy 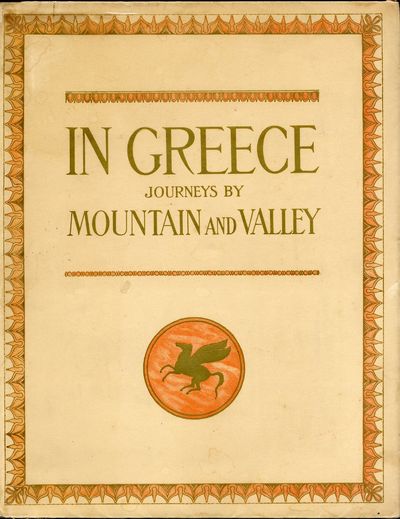 by [BOISSONNAS]. Baud-Bovy, Daniel, and Fred. Boissonnas
Geneva: Éditions d'Art F. Boissonas, 1920. First English language edition. Boissonnas, Fred.. Folio, iv, 5-133 pp., with 40 full-page photogravure plates with printed tissue guards, and numerous photogravures in text. Decorative borders and devices in color, printed on handmade paper. Printed wrappers, titled in gilt, with an orange inset medallion of Pegasus on the front cover. New spine applied, modest stain on rear wrapper and faint stain to top corner Over all certainly very good, with the photogravures beautifully rendered. Fred Boissonnas (1858 - 1946) was from an influential family of photographers, initially situated in Geneva. His accomplishments in photography enabled him to travel widely and often, and from these travels he produced several books, including works on Greece and Egypt. His Greek images totaled over 7000 photographs made with large format cameras, and are inclusive of historical architectural remains, and vistas and landscapes. In the early 20th century he founded the publishing firm of Boissonnas S.A., which produced several exquisite limited editions illustrated with hand-pulled photogravure plates, elegant design and letterpress of several color inks. In 1910 he made EN GRÈCE PAR MONTS ET PAR VAUX from his enormous archive of Greek negatives. That lavish large folio was limited to 230 numbered copies printed on handmade paper; in 1936 he also issued a second edition in a smaller folio format with a larger limitation. This is the first edition published in English, and has a limitation of 300 numbered copies. (Inventory #: 30183)
$2,000.00 add to cart or Buy Direct from
Andrew Cahan: Bookseller
Share this item
Andrew Cahan: Bookseller, Ltd.
Offered by

A GROUP OF FOUR LETTER, THREE ON DUNSANY CASTLE LETTERHEAD

1945 - 1953
(click for more details about A GROUP OF FOUR LETTER, THREE ON DUNSANY CASTLE LETTERHEAD)

[Augusta, Maine] : Entered according to Act of Congress in the year 18[5]9 by Scofield Leavit in the Supreme Court of Maine , 1859
(click for more details about INSTRUCTIONS FOR ROMAN CHRYSTALLOTYPE PAINTING, TAUGHT BY JOHN M. DONAHOE)
View all from this seller>