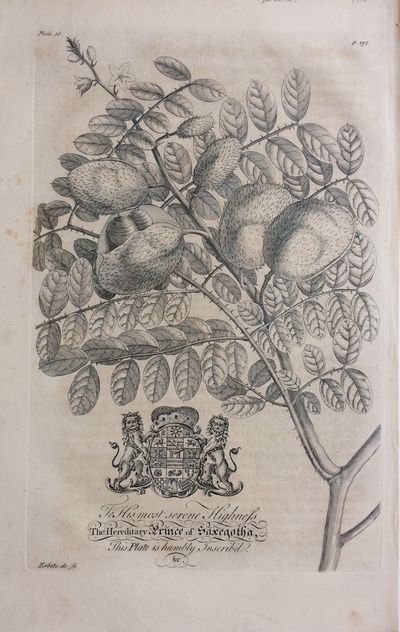 by EHRET, George Dionysius
London, 1750. unbound. Engraving. Image measures 11.25" x 7.5", sheet measures 13.75" x 9". Shows some light foxing, and some light toning at edges. In very good condition. Plate 18, page 195 from "The Natural History of Barbados" by Reverend Griffith Hughes, A.M. which depicts local flora and sea fauna from the island country. Inscription reads: To His most serene Highness the Hereditary Prince of Saxegotha, This Plate is humbly Inscrib'd, &c". Each plate is dedicated to a prominent person in elaborate engraved calligraphy and accompanied by a rendering of the dedicatee's coat of arms. George Dionysus (G.D.) Ehret was a dominant influence in botanical art during the 18th century. He was born in Heidelberg, Germany, and trained as a gardener. He later traveled throughout Europe, settling in England as a Fellow of the Royal Society. (Inventory #: 284468)
$300.00 add to cart or Buy Direct from
Argosy Book Store
Share this item