Using the American Quarter Horse (signed By Both authors) 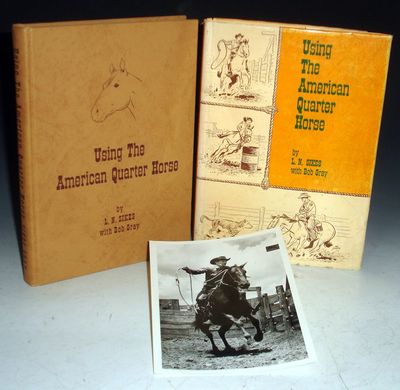 by Sikes, L.N. and Bob Grey
Houston: Saddlerock Corporation, 1958. First Edition. Octavo. 158 pages, 56 photographs, illustrations. Signed by L.N. Sikes and Bob Grey. Laid in is a photograph of L.N. Sikes taken by Bob Grey and signed on the back: "L.N. Sikes, DeQueen, Ark." Also laid in is a two page advance description of the book. It was issued as the first complete book on the history, training and use of the quarter horse. The books shows the history then talks about buying, raising, training colts, cutting, roping, reining horses and barrel racers. It also deals with halter shows, bulldogging and straightaway racing. Besides his experience as a veteran rodeo roper, he became a major judge while managing his large ranch near DeQueen, Arkansas. What makes this book a pleasure to those raised in the ranch atmosphere is it was recorded and then transcribed so it sounds like the west not an eastern writer who tried to sound authentic though his only experience with a horse was a photograph taken on pony as a small child. Bound in light pictorial brown cloth depicting the head of a horse with lettering in dark brown, spine lettering dark brown, near fine in very good unclipped pictorial dust jacket. (Inventory #: 026667)
$175.00 add to cart or Buy Direct from
Alcuin Autographs
Share this item