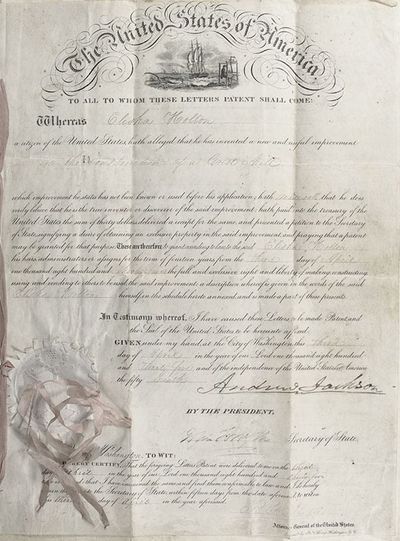 by Jackson, Andrew
1835. Original patent executed and signed by Andrew Jackson as President of the United States. Two folio vellum leaves. Engraved vignette header, embossed paper seal with ribbons, ribbon bound. Signed by President Andrew Jackson on April 3rd 1835. Countersigned by Secretary of State John Forsythe and Attorney General Benjamin F. Butler. The patent is issued to "Elisha Holton, a citizen of the United States, who hath alleged that he has invented a new and useful improvement in the construction of a grist mill." The second page contains a lengthy hand-written description of the construction and design of the grist mill signed by Holton on the verso. Also bound in is an original hand-colored technical drawing of the grist mill. In fine condition. The entire document measures 15 inches by 11.5 inches. Uncommon. Rare and desirable in this condition and format. American statesman and soldier Andrew Jackson was inaugurated as the seventh President of the United States of America in 1829 after defeating President John Quincy Adams in a landslide electoral victory. "The Age of Jackson" was marked by a shift and expansion of democracy with a goal of passing a portion of the political power of the established elites to the ordinary voter, or "common man" whom Jackson strongly believed had the ability to "arrive at right conclusions." Throughout his term, Jackson sought to reduce the power of the federal government in favor of agrarian sympathies which resulted in the redistribution of the Native American population and the ascendancy of the party spoils system. (Inventory #: 89149)
$3,000.00 add to cart or Buy Direct from
Raptis Rare Books
Share this item