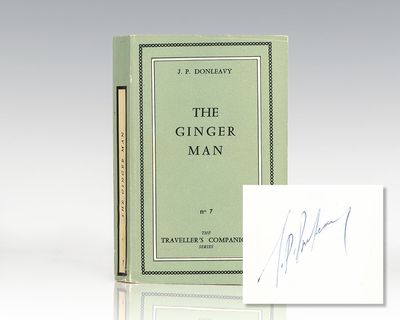 by Donleavy, J.P
Paris: The Olympia Press, 1955. First edition, first issue with the words, Special Volume, Francs: 1.500 to the rear panel. Small octavo, original green wrappers as issued. Boldly signed by J.P. Donleavy on the front free endpaper. In near fine condition. Introduction by Arland Ussher. A nice example. The New York Times said "[t]here are a few novelists who are writing out of a sense of what the contemporary world is all about. The best of them is J. P. Donleavy," and the Scientific American called it "one of the books which reveals their quality from the first line. On every page there is that immediacy all good writing has." The Modern Library named The Ginger Man one of the 100 Best Novels of the Twentieth Century in 1998, and it has sold 45 million copies world-wide. Consequently, it has never been out of print, and it has been made into several theater and film adaptations. (Inventory #: 91458)
$2,500.00 add to cart or Buy Direct from
Raptis Rare Books
Share this item