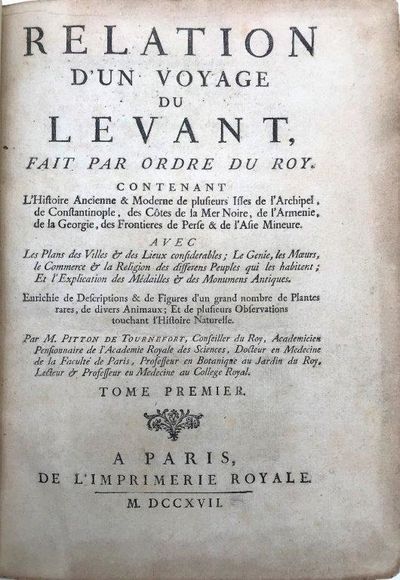 by TOURNEFORT, Joseph Pitton de.
Paris:: de l’Imprimerie Royale, 1717., 1717. Two volumes. 4to. 250 x 185mm. Collection: a-b4, c1 A-3Y4; [*]2, A-3V4 3X-4G2 [4G2 blank]. Pagination: [xxviii], 544; [iv], 526, [38], [3 blank] pp. 152 plates & maps, after Claude Aubriet; head and tail-pieces & initials, a few text cuts; some occasional toning, some offsetting from plates. Contemporary dark calf, seven raised bands and gilt-stamped compartments, double blind rules, gilt, gilt-stamped labels on red and black calf; previously re-hinged and re-capped, joints skillfully strengthened with colored Kozo. Armorial bookplates of Sir Frederick Hervey Bathurst. Very good. First Quarto edition. AN IMPORTANT BOOK OF VOYAGES TO THE LEVANT. There are two issues of this work, one on ‘papier fine’ and one on ‘ordinary’ paper. This is one of the sets on ordinary paper. "The First Edition Is Rare...Tournefort was one of the greatest botanists of his time, discovering many new plant species during his travels in the Levant." [Blackmer]. The 152 engraved plates and maps (many folding) were drawn by Claude Aubriet, who participated in the expedition. Tournefort was a professor of botany at the Jardin des Plantes in Paris. He was sent to the Levant (countries in the eastern part of the Mediterranean Sea) by Louis XIV in 1700 to conduct botanical and zoological research. He was accompanied by doctor von Gundelsheimer and the artist Claude Aubriet. The outbreak of plague prevented him from exploring Egypt and Syria. This account of his travels 1700-1702, consisting of letters written to the Comte de Pontchartrain, Minister of Marine, who sponsored the mission, contains remarks on topography, maps, customs, costumes, antiquities, commerce, zoology, botany, and mineralogy. He traveled through the archipelago, visiting most of the islands of the Cyclades. He visited Crete before going to Constantinople and Turkey, covering the coasts of the Black Sea, continuing into Armenia, Mount Ararat, and Persia, Georgia, and returned by Asia Minor to Smyrna. "Tournefort was one of the greatest botanists of his time, discovering many new plant species during his travels in the Levant." The outstanding achievement of the expedition was the record of 1256 plants, many of which were previously unrecorded. Tournefort (1656-1708), renowned French botanist. "After his school-days at a Jesuit college he studied theology at Aix, but in 1677 he turned his attention entirely to botany. He studied medicine at Montpellier and Barcelona. In 1683 he was made a professor and director at the Jardin des Plantes, Paris; he became later a member of the Academy (1692), a doctor of medicine (1698), and professor of medicine at the College de France (1702). Tournefort is recognized as a botanical explorer, and as the author of the artificial system of plants named after him. As a youth he travelled repeatedly through Western Europe, exploring particularly the region of the Pyrenees. In 1700-2 he visited the Orient, passing through Greece. The account of this journey, Relation d’un voyage du Levant (Paris, 1717), appeared after his death; his work is a classic and was translated into English (1741) and German (1776). He collected 1356 species of plants during this one journey." [Catholic Ency.]. Provenance note: Sir Frederick Hervey Bathurst (1807–1881), 3rd baronet, a famous cricketer. But this attribution for the bookplate on this book doesn’t seem right – I wonder if this book had been in the family library earlier. It is interesting that Hervey Bathurst (1714-1794), a lawyer and member of Parliament, also knew Sir William Jones (1746-1794), the pioneering Orientalist and translator of many Persian tales into English. This book would be a logical addition to a library with such an association. "Among those upon whom he conferred office was Sir William Jones, who in return dedicated to Earl Bathurst his translation of the speeches of Isaeus." – DNB. His son, Henry Bathurst, was the 3rd Earl Bathurst (1762-1834), also a politician. See: Debrett’s Baronetage, p. 394. Atabey 960 (this issue). Leonora Navari, Greece and the Levant: The Catalogue of the Henry Myron Blackmer Collection of Books and Manuscripts, Maggs Bros, 1318; Blackmer Sale Cat. 329 (copy on papier fin); Cox Travel I, 221; Weber 458; Lipperheide, Treasures from the Lipperheide collection and the Ornamentstich collection. Kunstbibliothek, Staatliche Museen Preussischer Kulturbesitz, (1970), 1442 (Amsterdam 1718 ed.); Hunt Botanical Catalogue 444 (Third ed., Amsterdam 1718 issue); Nissen (ZBI) 4154. Christos G. Zacharakis, A catalogue of printed maps of Greece, 1477-1800, Nicosia, (1982), 2058-2068 (Amsterdam 1718); Crowther 2022; Brunet V,903; The A.E. Nordenskiold collection in the Helsinki University Library: Annotated catalogue of maps made up to 1800. Humanities Press, (1979), 3,697. (Inventory #: LLV1998)
$4,750.00 add to cart Available from
Jeff Weber Rare Books
Share this item