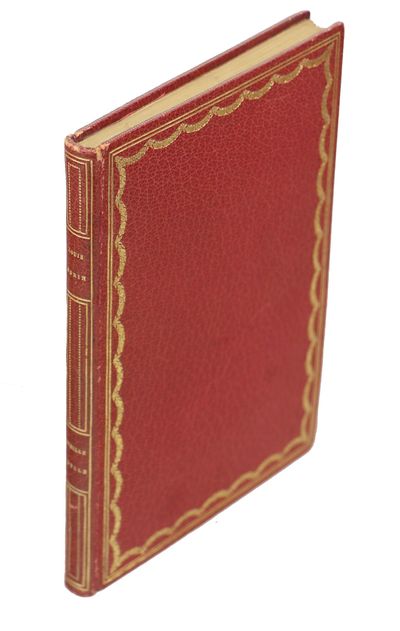 by Morin, Louis
Paris: Librairie L. Conquet, 1891. First edition. Hardcover. Near Fine. Small 12mo. [10], 51, [9] pp. Bound by the well-known French artisan and bookbinder Leon Gruel in red Morocco, top edge gilt. Stylized gilt borders and gilt rules on the boards, gilt lettering and decorations on the spine, red fabric with floral design on endpapers and matching fabric used on the pastedowns, surrounded by elaborate gilt designed border on red Morocco, with a light blue silk bookmark bound in. Vignette title page in color along with a frontispiece and eleven plates and numerous decorations, all by the author. This is the publisher's presentation issue on vellum paper, signed by publisher and bookseller Leon Conquet with his indication that this copy is for Monsieur Legrand. This almost certainly was the well-known French illustrator Louis Legrand. Legrand moved to Paris in 1884 and began studying printmaking with the Belgian artist Felicien Rops who was under exclusive contract to Conquet from 1883 to 1885. Conquet's bookshop in Paris was a kind of salon for Parisian bibliophiles and illustrators and Conquet, Rops, Morin, and Legrand would have been well-acquainted by the time of this book's publication in 1891. Although there are no other ownership markings, the foregoing and Conquet's eschewal of using initials or a first name to identify the intended recipient suggests that there was only one person named Legrand who could be the intended recipient of a presentation copy of this book, Louis Legrand himself (See W. Z. Silverman, The New Bibliopolis for illuminating discussion of each of these individuals and the Parisian book world during this era). A beautiful copy of this wonderful confluence of associations in the world of late 19th century French book arts and illustration. A Near Fine book with offsetting from the bound in bookmark on pages 22 - 23 (where it presumably laid for many years) and a faint dampstain on the front flyleaf but otherwise a clean and attractive example. (Inventory #: 00007755)
$1,250.00 add to cart or Buy Direct from
Evening Star Books
Share this item