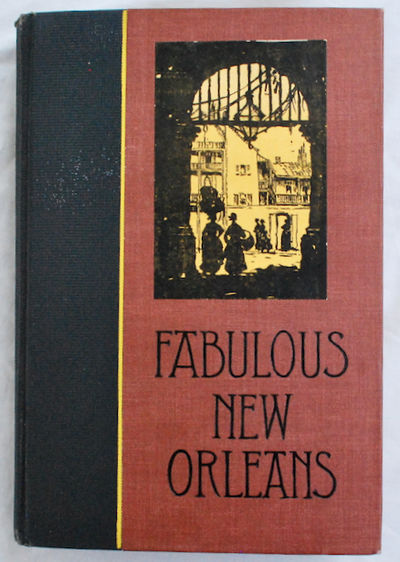 by Lyle Saxon (1891-1946)
New York and London: D. Appleton-Century Company, 1935. Later Edition. Hardcover. Good. Edward Howard Suydam (1885-1940). LATER EDITION, first printed in 1928, this title was reprinted frequently thereafter. 8vo. 9 1/4 x 6 1/4 inches. 350 pp. Color frontispiece, 32 plates, 35 headpieces, bibliography, index; text clean, unmarked. Cloth with illustrated paper label on front cover, gilt spine, illustrated end-papers; binding stressed due to the additional maps, one of which is mounted in the front fly-papers, rubbed. Mounted in the front fly-leaves is a illustrated folding map entitled "Le Vieux Carre de la Nouvelle Orleans Over A Span of Many Years, A Map Done in the Year 1928 by Lucile Gillican & Louis Andrews," in 3 colors printed on antique cover stock, copyright 1929 by Lucile Gillican. Small tear at one of the folds, else fine. Loosely laid in is an "Official Map and Guide of New Orleans, U.S.A., Map in Colors Showing House Numbers, Street Car and Bus Lines, Railroads, Parks, Waterways, Ferries and Etc. Complete Directory of Interesting Points, Business District and Amusements. Including Map of the Vieux Carre and Part of the Commercial District." New Orleans: Wm. E. Boesch, (1934). Very Good map. 2 nice early twentieth-century maps of New Orleans in a Good copy of the book. A nicely illustrated book that evokes the traditions and idiosyncrasies of three cultures, French, Spanish, and American. Lyle Saxon was widely acknowledged as one of New Orleans' great writers and journalists; topics include Mardi Gras, strange and remarkable events, the Mississippi flood of 1927, the great plague, and voodoo ceremonies, among others. (Inventory #: WY617-105)
$35.00 add to cart Available from
John Howell for Books
Share this item