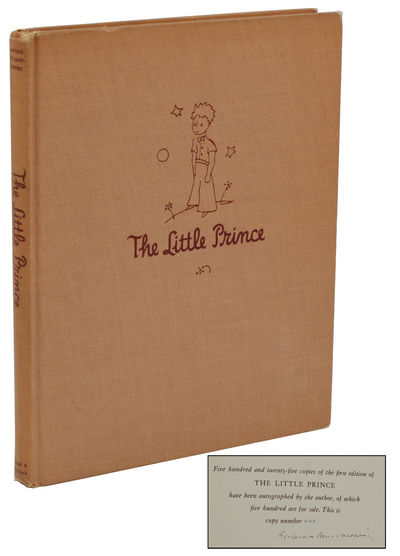 by Saint-Exupery, Antoine de
New York: Reynal & Hitchcock, 1943. First Edition. Hardcover. Very Good. Signed limited first edition. Copy 435 of a limited 525 numbered copies, signed by Antoine de Saint-Exupery. Bound in publisher's salmon cloth stamped in maroon; lacking the dust jacket. Near Fine, with bump to top edge of front board, light wear at the spine ends. Very, very faint discoloration to cloth at bottom corner of rear cover, visible only from a certain angle. Previous owner name to front free endpaper. Now a beloved classic translated into over 300 languages, The Little Prince has become one of the best selling books ever to be published. However, signed copies of are rather scarce, since during the month of publication, the aviator-author was called to serve in the Free French Air Force. While flying a reconnaissance mission the following year, he disappeared over the Mediterranean Sea without a trace. (Inventory #: 180825010)
$13,500.00 add to cart Available from
Burnside Rare Books
Share this item
Burnside Rare Books
Offered by

The Buck in the Snow & Other Poems

New York : Harper & Brothers , 1928
(click for more details about The Buck in the Snow & Other Poems)
View all from this seller>