The Sweet Flypaper of Life. 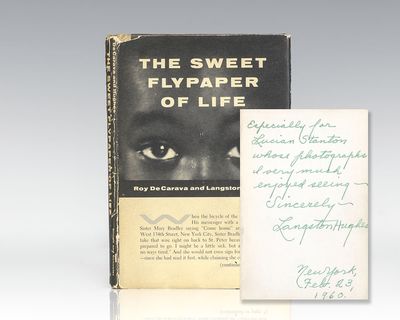 by DeCarava, Roy and Langston Hughes
New York: Simon & Schuster, 1955. First edition of the classic collaboration between Roy DeCarava and Langston Hughes. Small octavo, original half cloth. Presentation copy, inscribed by Langston Hughes on the front free endpaper, "Especially for Lucian Stanton whose photographs I very much enjoyed seeing- Sincerely- Langston Hughes New York Feb. 23, 1960." An excellent example in the original dust jacket. Roth 101, Parr & Badger, The Photobook I, 242; The Open Book, 160. The hardcover is much more uncommon than the wrapper edition. Acknowledged as the most influential black writer of his generation, and as one of the greatest American poets of all time here composed a fictional story to accompany DeCarava’s images, creating a lyrical tale about imaginary characters to go with photographs of real people" (Roth, 138). Hailed as "an important step forward" in the history of photobooks, Sweet Flypaper of Life proved especially significant in its "design, featuring a pacy, cinematic style. It is also a book that had more impact in its cheaper paperback edition, since, radically, Hughes’ text begins on the cover" (Parr & Badger II:242). "The book won two awards, received critical acclaim in The New York Times Book Review sold out its first edition, and was reprinted many times. It is one of the most successful collaborations between a great writer and a great photographer ever published" (Roth, 138). (Inventory #: 90534)
$2,250.00 add to cart or Buy Direct from
Raptis Rare Books
Share this item

The Autobiography of Alice B. Toklas.

New York : Harcourt Brace and Company , 1933
(click for more details about The Autobiography of Alice B. Toklas.)

Prince Caspian: The Return to Narnia.

London : Geoffrey Bles , 1951
(click for more details about Prince Caspian: The Return to Narnia.)
View all from this seller>