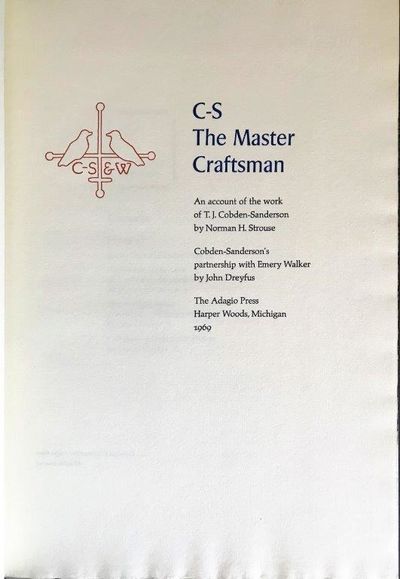 by STROUSE, Norman H. & John DREYFUS. C-S.
Harper Woods, Michigan:: The Adagio Press. 1969., 1969. Folio [15 ½ x 10 ¼ inches]. 50, (4) pp. Printed in black, red & blue. Tipped in are 2 leaves from the Doves Press (one from Goethe's Faust [1906] and one from the Doves Press Bible "The Translators to the Reader" [1902]). Original vellum backed gilt-stamped marbled boards. Bookplate of Jacob L. Chernofsky. Fine. [Accompanied by:] Cobden- Sanderson, Stella and others. A LETTER FROM STELLA. An Epilogue to the Publication of C-S The Master Craftsman. Harper Woods, MI: The Adagio Press. 1971. 8vo. [20] pp. Title & colophon printed in green & black. Pamphlet. This is copy #XLVI (limitation not stated). Printed brown wrappers, stabbed & tied at inner margin. Fine. LIMITED EDITION of 242 copies, this being copy number XLVI, signed on the limitation leaf by the printer Leonard F. Bahr [1/75 special copies]. This is the most desirable book from this press - wanted for the fine printing design and tastefully selected materials that honor tradition, but mostly the 2 original leaves that come from the master-printer T.J. Cobden-Sanderson, to whom this publication pays homage. The edition consisted of three different issues, each differently valued leaves - the better issue with vellum leave(s). The printer also differentiated the issues by lettering & numbering with the dual leaves contained in each copy: Twelve copies lettered A-L contained 2 leaves on vellum; 75 copies [I-LXXV], 1 leaf on vellum, and the remainder are 155 copies with original leaves each printed on paper. This is the 1/75 issue. As stated by Tony Bliss, Norman Strouse's great "fascination with T. J. Cobden-Sanderson as both printer and binder led him to collect all of the Doves imprints, to expand into the collecting of the work of the Doves Bindery, the personal bindings of Cobden-Sanderson, the bindings of Cobden-Sanderson's pupils, and the work of binders influenced by the master. To bolster this collection and make it a truly great resource for research, he acquired manuscripts and correspondence of Cobden-Sanderson. Norman used this collection in the writing of two works: C-S the Master Craftsman, (Adagio Press, 1969) and A Letter from Stella, (Adagio Press, 1971)." - Bancroftiana, no. 106, August 1993, p.2. [not titled, but leading, "I am always mindful. . . " PROVENANCE: Jake Chernofsky was the owner-editor and owner of the former AB Bookman's Weekly (1948/53-1999), Nicholas Basbanes, calling it "the leading trade publication in the antiquarian world." With: Broadsheet laid-in, "Emery Walker and T. J. Cobden-Sanderson in the courtyard of The Doves Press circa 1904." Copy of a photograph taken by Dr. Charles T. Silve. With: added printed gift-card, issued from The Adagio Press. Chalmers, Check List of Leaf Books, 154. (Inventory #: LLV2311)
$1,800.00 add to cart Available from
Jeff Weber Rare Books
Share this item