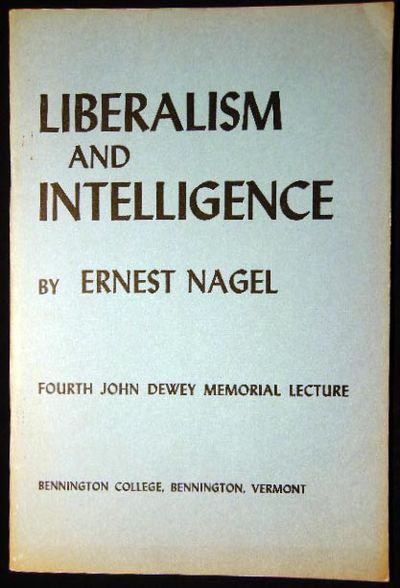 by Nagel, Ernest
Bennington, Vermont: Bennington College, 1957. 23 pages; lecture on the values of the freedom of liberal thought by Ernest Nagel (1901 - 1985) philosopher of science and long-term professor at Columbia "...Consistent with his other philosophical views, Nagel was critical of those historians who have tried to establish, on a speculative basis, general historical laws. In contrast, he was sympathetic with historians who attempt to propose tentative but intricate explanations of important historical events...He was among the most prominent philosophers of science in the United States of his generation..." (Patrick Suppes in the ANB) Approx. 6" x 9" size; plain stapled light blue printed paper covers; a little light wear to the binding, edge-color fade; contents clean and in very good condition.. First Edition. Soft Cover. Very Good. (Inventory #: 25560)
$45.00 add to cart or Buy Direct from Certain Books
Share this item
Certain Books
Offered by

1778 - 1784 Collection of Four Publications Regarding The Plague in Russia & Europe, Bound in One: By Charles De Mertens; M.D. Samoilowitz; and Jean-Francois Paris

by (History of Medicine - 18th Century - The Plague)

A Vienne & A Strasbourg : Chez Les Freres Gay Imprimeus-Libraires et al , 1784
(click for more details about 1778 - 1784 Collection of Four Publications Regarding The Plague in Russia & Europe, Bound in One: By Charles De Mertens; M.D. Samoilowitz; and Jean-Francois Paris)

Philadelphia, Pennsylvania : Lindsay and Blakiston , 1867
(click for more details about Epidemic Meningitis, or Cerebro-Spinal Meningitis By Alfred Stille, M.D.)
View all from this seller>