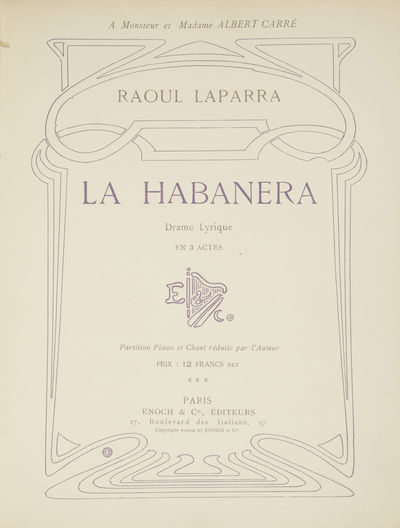 First performed in Paris at the Théâtre National de l'Opéra-Comique on February 26, 1908.

A French composer admired by Ravel, Laparra "studied with Gédalge, Fauré, Lavignac and Diémer although his music, with its constant reference to Spanish dance, must surely owe a lot to Albéniz. He was awarded the Prix de Rome in 1903 for his cantata Alyssa... His early career was mostly devoted to opera. He also made a substantial contribution to the mélodie, composing songs throughout his life." Richard Langham Smith in Grove Music Online.

In his operas and instrumental music, Laparra writes vivid Spanish pastiche, with many different kinds of dance and cante jondo... Two of Laparra's operas, La habanera (1908) and La jota (1911), have dance scenes built into the librettos and deal with Latin concepts of honour and revenge." op. cit. (Inventory #: 29018)
$33.00 add to cart or Buy Direct from
J. & J. Lubrano Music Antiquarians
Share this item