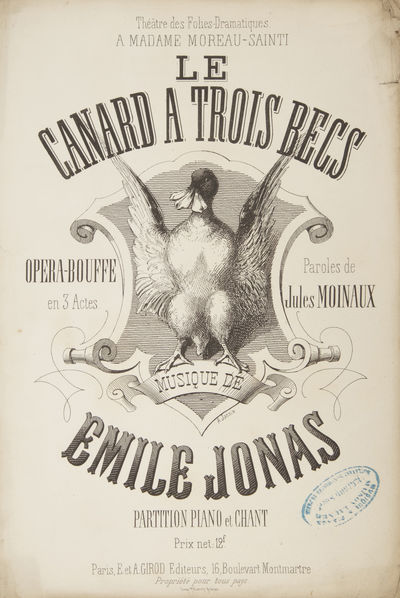 A French composer, Jonas studied at the Paris Conservatoire, later becoming a professor of solfège and harmony. "He became director of music at the Portuguese synagogue, and published a collection of Hebrew tunes in 1854. He was an early contributor to Offenbach's Bouffes-Parisiens with the one-act operetta Le duel de Benjamin (1855), followed by Le roi boit (1857) and several more. Les deux arlequins (1865) and Le canard à trois becs (1869) gave him success abroad, and their production at the Gaiety Theatre, London, led to a commission for the three-act Cinderella the Younger (1871), later produced in Paris as Javotte." Andrew Lamb in Grove Music Online. (Inventory #: 28340)
$55.00 add to cart or Buy Direct from
J. & J. Lubrano Music Antiquarians
Share this item