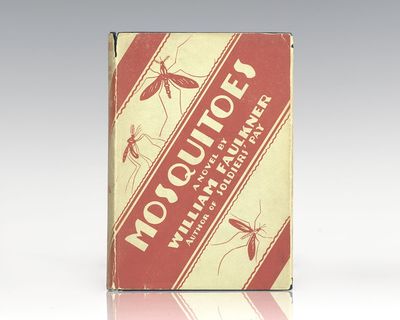 by Faulkner, William
New York: Boni & Liveright, Inc, 1927. First edition of Faulkner's second novel. Octavo, original cloth, pictorial endpapers. Near fine in a near fine dust jacket with a small chip to the front flap. From the library of Virginia bibliophile and historian Christopher Clark Geest with his bookplate to the pastedown. A very nice example of this early Faulkner work. On a yacht on Lake Pontchartrain, a diverse group of strangely associated people including a social climber, famous writer, sculptor, and Englishman embark on a four-day excursion from the city of New Orleans. Evidently inspired by an similar excursion from Faulkner's own life, the novel offered a tongue in cheek criticism of the repetitive and mundane preoccupations of the New Orleans creative community Faulkner was immersed in at the time. (Inventory #: 91795)
$4,800.00 add to cart or Buy Direct from
Raptis Rare Books
Share this item