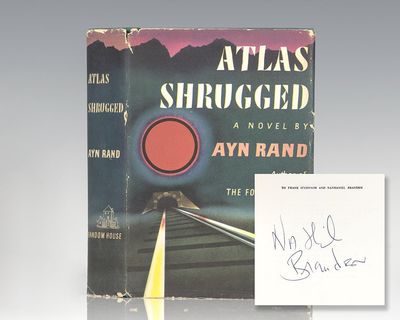 by Rand, Ayn
New York: Random House, 1957. First edition of one of the most influential novels of the twentieth century. Thick octavo, original green cloth, frontispiece stamped in gilt, spine stamped in black and gilt. Signed by one of the dedicatees Nathaniel Branden on the dedication page. Branden was an associate and romantic partner of Ayn Rand, and played a prominent role in the 1960s in promoting Rand's philosophy, Objectivism. In 1950, after he had read The Fountainhead and exchanged letters and phone calls with Ayn Rand, Branden and his then-girlfriend Barbara Weidman visited Rand and her husband Frank O'Connor at their Los Angeles home. The four became close friends, with Branden and Rand in particular sharing a vivid interest in philosophical exploration and development. After the publication of Rand's novel Atlas Shrugged, and sensing an interest on the part of Rand's readers in further philosophic education, Branden created in 1958 the Nathaniel Branden Institute, originally Nathaniel Branden Lectures, to disseminate Rand's philosophy of Objectivism, by offering live and taped lecture courses by Rand, Branden, and a variety of other Objectivist intellectuals (including Alan Greenspan, whom Branden had brought into Rand's fold). During this time Branden also contributed articles to Rand's newsletters on subjects ranging from economics to politics to psychology. Branden's work at NBI included translating the principles expressed by Rand in her fiction and non-fiction writing into a systematized construct that became known as Objectivism. Near fine in a very good first issue dust jacket. Jacket design by George Salter. From 1943 until its publication in 1957, [Rand] worked on the book that many say is her masterpiece, Atlas Shrugged. This novel describes how a genius named John Galt grows weary of supporting a society of ungrateful parasites and one day simply shrugs and walks away. He becomes an inspiration to like-minded men and women, all of whom eventually follow his example, until society, in its agony, calls them back to responsibility and respect. Again [as with Rand's novel The Fountainhead in 1943] reviews were unsympathetic, and again people bought the book" (ANB). The theme of Atlas Shrugged, as Rand described it, is "the role of man's mind in existence." The book explores a number of philosophical themes that Rand would subsequently develop into the philosophy of Objectivism. By 1984 more than five million copies of Atlas Shrugged had been sold, and in a 1991 Library of Congress survey Americans named it second only to the Bible as the book that had most influenced their lives. Atlas Shrugged is a trilogy of American science fiction drama films. Basis for the trilogy of film adaptations subtitled Part I (2011), Part II (2012), and Part III (2014). (Inventory #: 92432)
$2,200.00 add to cart or Buy Direct from
Raptis Rare Books
Share this item