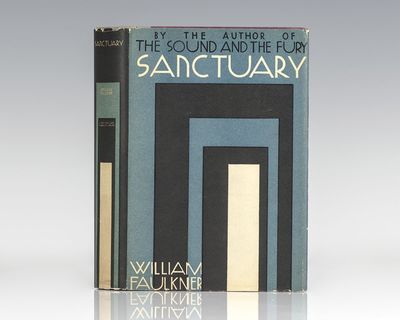 by Faulkner, William
New York: Johnathan Cape & Harrison Smith, 1931. First edition of the novel that established Faulkner's literary reputation. Octavo, original half cloth, pictorial endpapers. From the library of Virginia bibliophile and historian Christopher Clark Geest with his bookplate. Near fine in a near fine dust jacket. A very sharp example. Set in Faulkner's fictional Yoknapatawpha County, Mississippi in the summer of 1929, Sanctuary is a story of murder, rape, and abduction; widely considered Faulkner's most controversial work and the novel responsible for his breakthrough as one of the most talented writers of the 20th century. "It is one of the most terrifying books I have ever read. And it is one of the most extraordinary" - Edwin Seaver. (Inventory #: 91796)
$4,500.00 add to cart or Buy Direct from
Raptis Rare Books
Share this item