The Harder They Fall. 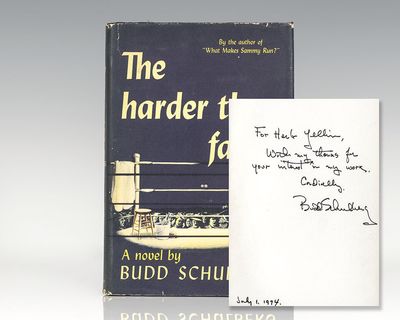 by Schulberg, Budd
New York: Random House, 1947. First edition of Schulberg's second book, basis for the 1956 film directed by Mark Robson, featuring Humphrey Bogart's final film role. Octavo, original cloth. Presentation copy, inscribed by the author on the front free endpaper, "For Herb Yellin, With my thanks for your interest in my work. Cordially Budd Schulberg July 1, 1974." The recipient Herb Yellin was the founder of The Lord John Press. Near fine in a near fine dust jacket. Jacket design by Louis Glanzman. Crowded with unforgettable characters, it is a relentless expose of the fight racket. A modern Samson in the form of a simple Argentine peasant is ballyhooed by an unscrupulous fight promoter and his press agent and then betrayed and destroyed by connivers. Schulberg creates a wonderfully authentic atmosphere for this book that many critics hailed as even better than What Makes Sammy Run? "The book will stand not only as the novel about boxing but also as a book that indirectly tells more about civilization than do most books about civilization itself" (Arthur Miller). It was the basis for the 1956 film directed by Mark Robson, written by Philip Yordan, starring Humphrey Bogart, Rod Steiger and Jan Sterling. (Inventory #: 85365)
$600.00 add to cart or Buy Direct from
Raptis Rare Books
Share this item

The Wall and Other Stories.

New York : New Directions , 1948
(click for more details about The Wall and Other Stories.)
View all from this seller>